August 23, 2011
On Saturday we hosted a Dino Dig to celebrate the boys' birthdays. I had planned for it to be an outdoor party. Upon arrival each child was going to receive a bucket with a shovel and a brush. We had buried dinosaur fossils in the sand for them to excavate. We also had planned a dinosaur egg hunt & made footprint stencils for them to color with chalk. The days leading up to the party were spent making decorations and that morning we rushed to set everything up. 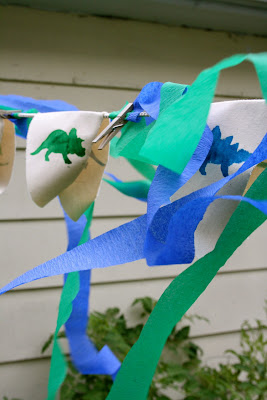 About fifteen minutes before the party was scheduled to start we realized it was definitely going rain so we rushed to move everything inside or to the front porch. 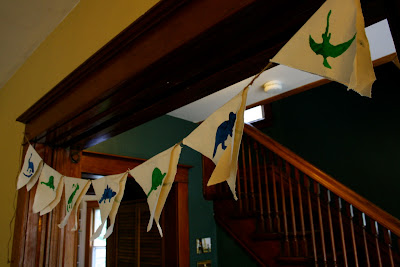 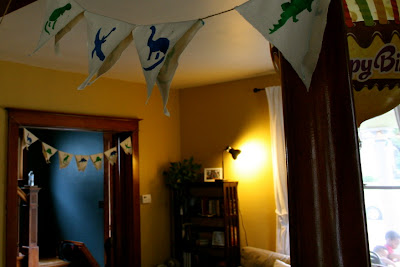 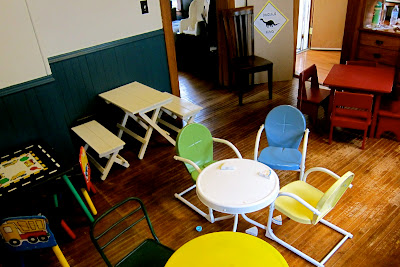 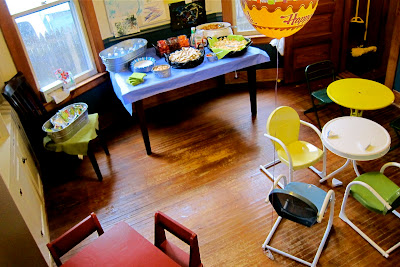 Then just as guests began to arrive it started to rain STORM. 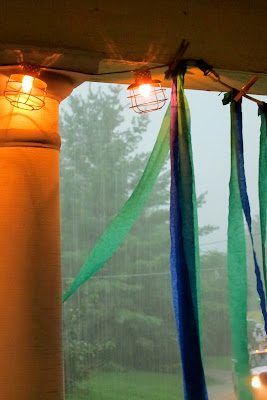 I was extremely thankful that we had decided to move everything before the party started. I wish I could say I had a 100% positive attitude about the whole thing, but I didn't. I was sad that the vision in my head wasn't going to come to fruition. But despite the rain, all our guests made it, the party happened, eggs where hidden inside, and dinosaurs were excavated under the protection of the front porch. 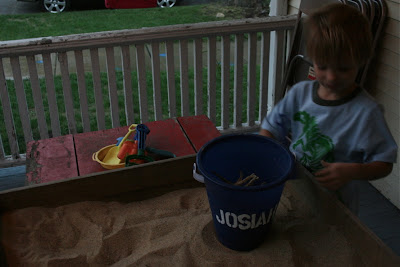 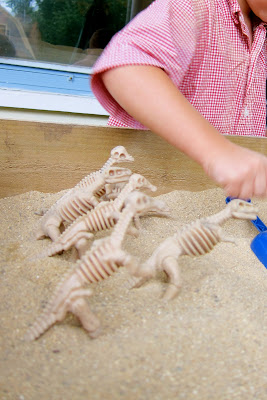 And most importantly there was still the cake... 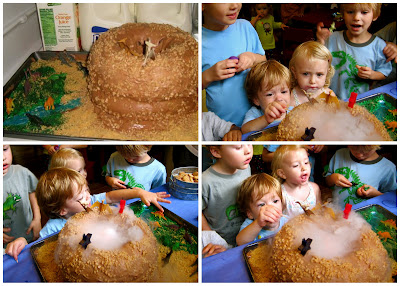 I'd say the party was a success. The boys and their friends throughly enjoyed themselves, and I learned some important lessons. First that decorations, activities, etc. can be a lot of fun, but they are not what makes a party great, it's friends. Especially friends who will venture out a in thunderstorm to help you celebrate. Secondly, if you put sand tables on your front porch and then hand a dozen children buckets and shovels you are asking for a big mess. 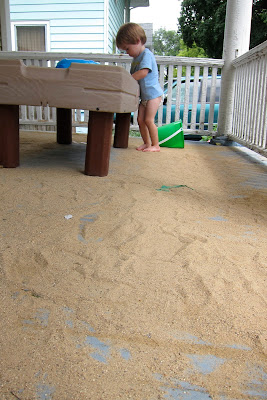 November 02, 2011
Normally I'd do a Dr. Seuss unit in March around his birthday. We had to do one now though because on Saturday Big Buddy and I going on a date to a  Dr. Seuss exhibit . The exhibit is only at the museum until January and I'm afraid if we don't go now we might not get the chance. We are of course reading lots of Dr. Seuss's books. A great advatage to studying Dr. Seuss in November rather than March is that all his books were available at the library. I also found a great children's biography which is perfect for preschoolers. Pebble First Biographies: Dr. Seuss  We've read it a couple times and Big Buddy loves reciting all the facts he's learned WRITING CENTER ADDITIONS big buddy's name in sand paper letters, coloring pages  & mazes from seussville.com skills practiced: fine motor, letter recognition, creativity,  reading comprehension LEARNING "TRAYS" -   I rotate these, setting out about four a day from which the boy&#
184 comments
This post is a long one, click thru to see more »

October 30, 2011
We've finished our farm unit and are moving on to a new theme tomorrow - but before we do I wanted share the barn we made. The wooden farm animals came with a beautiful handmade ark that we gave Big Buddy for Christmas a couple years ago.  I would someday love to have a wood barn but it's currently not in the budget. So in the mean time we decided to improvise and make our own.  I stumbled upon this perfectly sized milk box (4 gallons per box) while subbing and thought it would be sturdy enough to handle play. Hubandie and the boys used an x-acto knife and wood glue to build a barn shape. to get the doors to fold out hubandie used an x-acto knife and scored the inside of the cardboard We then painted with a basic primer and outlined a window and a door with painters tape. cardboard is very porous so priming is a must if you want decent coverage Big Buddy however insisted that we add more windows so it looked like the barn in our book The Big
154 comments
This post is a long one, click thru to see more »

A Whale of a Time

September 04, 2012
To celebrate Big Buddy's and Mini Man's respective birthdays we hosted a little a party last weekend. Since the boys birthdays are just a couple weeks apart we've always combined their celebrations. This summer the boys have been really interested in oceans so we went with a sea theme. I didn't want to spend a whole lot on decorations so we did what we could with balloons and streamers.  I also included the boys in the prep a little bit and had them help me make paper chains and paper plate fish. We had a couple activities set up for the guest to enjoy.  Since most of the eighteen children in attendance were preschoolers or toddlers we kept the activities pretty unstructured and set them up in stations so that children were free to enjoy them at their leisure.  a sandy sea shell search  water beads and sea animals  an easy & mess free aquarium craft  The activities seemed to be a hit but the most popular area was definit
3 comments
This post is a long one, click thru to see more »