A Little Trip to Boston

March 10, 2012
Last weekend I got to accompany Husbandie on a work trip to Boston. Maca was kind (and brave) enough to watch over our three crazy adorable kids while we were away. 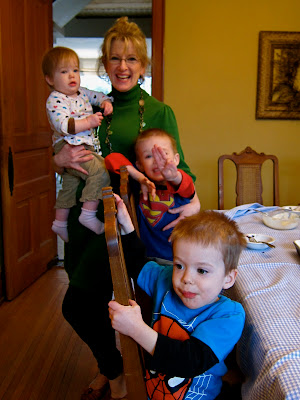 Which meant I got have this intelligent, funny, and handsome man all to myself - well, once his conference was over anyways. 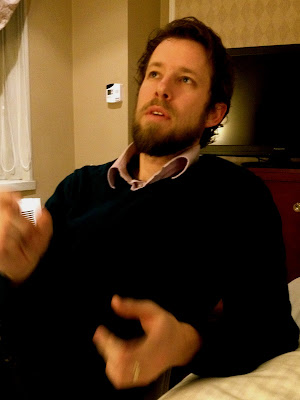 Boston is a beautiful city with tons of history to explore as well as lots of other things to see and do. Neither of us had been to Boston before so we debated a little bit about how much we should try to do in our long weekend. Ultimately, we decided to just relax, to not feel guilty about sleeping in, and to focus on enjoying each other. We spent a lot of time just walking through Boston's beautiful neighborhoods.

Our hotel was also only a block away from the Public Gardens, where we encountered very friendly squirrels. 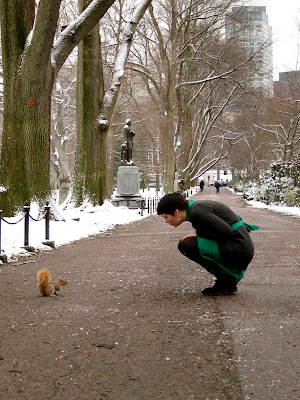 And were reminded of a favorite children's story. If you haven't already shared Make Way for Ducklings with your children, you should soon, it's a great tale. 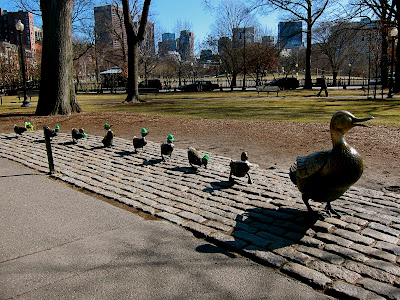 Boston's famous shopping district, Newbury Street, was also close to our hotel. So while husbandie was busy with his confrence, I was also quite happily occupied. In my opinion, it far outranked Chicago's Magnificent Mile - not just in store selection, it is also far more picturesque.


If you visit Boston and enjoy clothes I'd say it is a must. One of my favorite stores on the street was The Closet - it's a consignment shop filled with designer brands. I enjoyed 'oohing' and 'ahhing' over the Burberry trenches and Louboutins, which were still out my price range. I did, however, find some cords and a shirt that had been recently marked down - after 60 days most items are reduced 50%.

On Saturday I also ventured over to Cambridge for some bargain shopping at Boston's Garment District.  I had read about their $1.50 a pound sale and thought it sounded like a fun adventure. 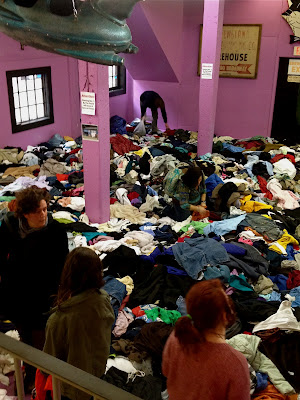 Unfortunately, the smell combined with the mess chased me away treasure-less after about five minutes. I then ventured upstairs which was much more my speed - racks and racks of vintage as well as current, gently-used clothing. 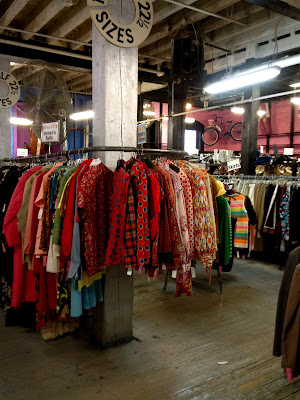 The prices were also pretty amazing! I scored two dresses for under $20 each, a skirt for $8, and a fun dress for Little Lady that was only $3.

After my shopping excursion, I then walked up to Harvard Square and while I don't know quite what I was expecting, I was a little disappointed. I know it's not the prettiest time of year but the campus did not impress me much, and the students looked just they do every where else - not genius-like as I had imagined. It was probably a good thing as I am now no longer harboring idealic ivy league fantasy for my children - state schools (or Judson - where Husbandie teaches) is just fine.

By Sunday Husbandie's conference was over, so we explored Boston's South End together and stopped in at the SOWA Market... 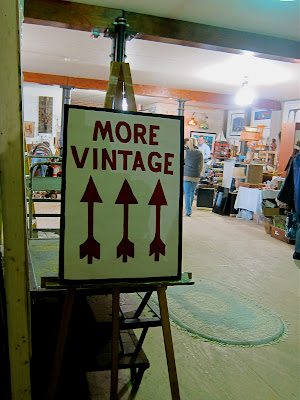 ...then walked back through town to The Boston Public Library - we both think libraries are one of the best places in the world. 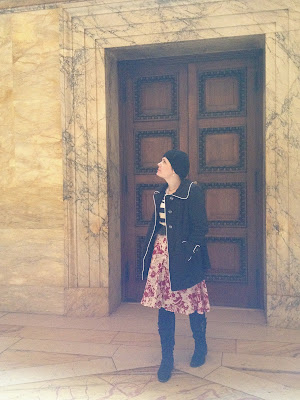 We took this picture just to be silly but I couldn't help but start actually reading the book. This lead to Husbandie waiting for me to finish what turned out to be quite an interesting section. 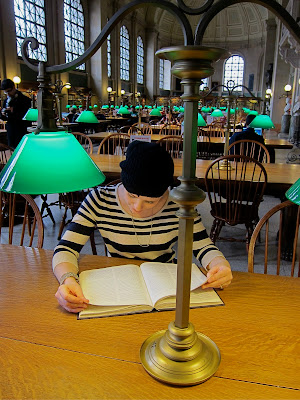 On Monday we continued in our "nerdy" pursuits and walked Freedom Trail. 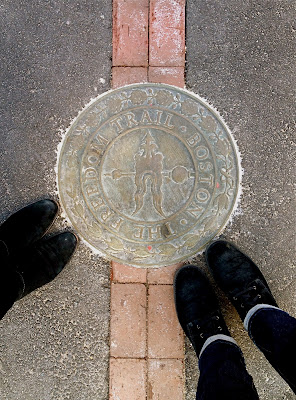 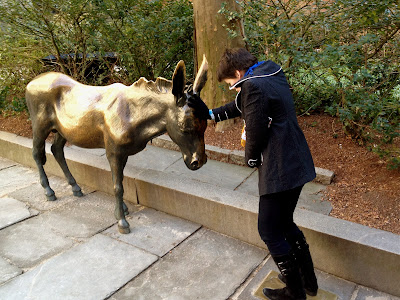 Our favorite stop on the trail was The Old Corner Bookstore - now a Chipotle. History, books, and Chipotle - it really can't get much better. 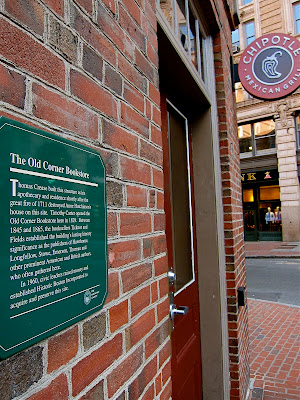 I also enjoyed touring the two churches on the trail. It was fascinating reading about the people who worshipped in these historic buildings and it was easy to imagine them all gathered there.  I also thought the box pews where brilliant. 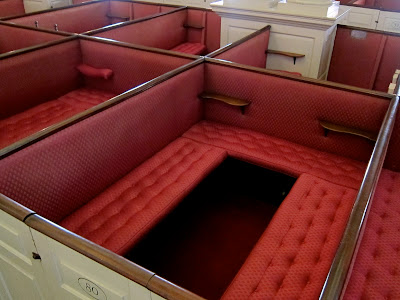 Husbandie found it amusing that the architect of the State House had a "cheap" pew (back then families rented their pews) but that it actually provided one of the most comfortable "views". 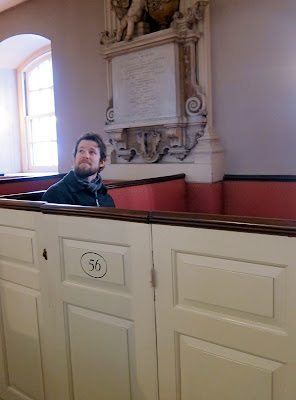 The trail ends at the Bunker Hill Monument - the climb to the top left me exhausted! 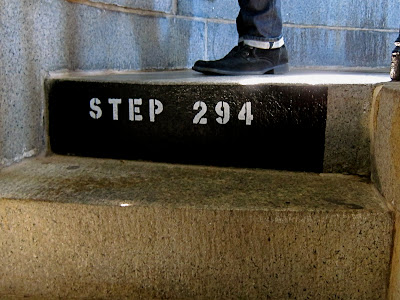 The view, however, was worth it. 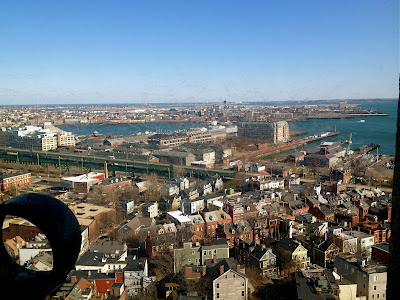 The trail took us to the North End neighbor of Boston which is also known as Boston's Little Italy. There are several Italian restaurants and bakeries in the area but we were told repeatedly that we had to try a cannoli at Mike's Pastry or Modern Pastry Shop. Since opinions were spilt on which one was best, and we adore our sweets, we stopped by both.

While both were delicious, I preferred Modern Pastry Shop. Not only did I like their cannoli better but the shop felt like a local treasure where Mike's feels like it caters to tourists. The people watching at Modern is probably what sold me - three local elderly gentlemen in suits having a playful argument. :)

My favorite food find in Boston however was this cafe in the Beacon Hill area. 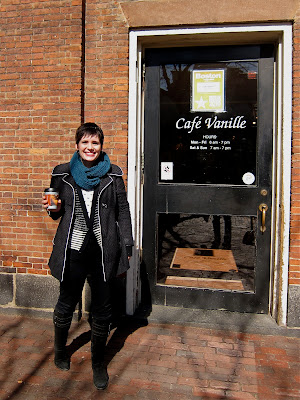 They had what has to be the world's best cinnamon croissants - seriously one of the greatest things I've ever tasted! 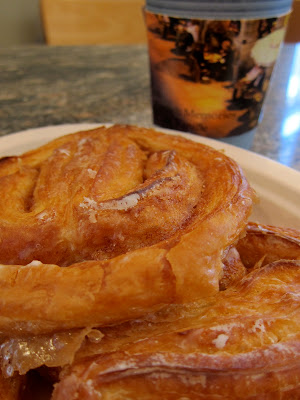 I liked them so much that we woke up early the morning we left so that we could have them one more time - which turned in to grabbing a few more to take home.