April 22, 2014
This past weekend we celebrated Easter. I am of course, in awe of the sacrifice that Jesus made for our salvation. However, as I look back on my walk with Christ I'm more amazed by His ability to redeem. To take something broken, something painful, and to bring new life to it.

Over fifteen years ago, I received what I thought was the most calamitous news, I would be returning home to my mom. I had been living in a foster home and for the first time in my life I felt secure - like I could finally be a kid. My mom had a difficult childhood and she carried many of those wounds in to her own family. She had a tendency to gravitate towards destructive men and to look to them to validate her. She was never allowed to be a child and thus wasn't ready to be a parent. Therefore, a lot of the responsibility of taking care my little sisters fell on me.


Before being placed in foster care my stepdad had become very abusive and had started dealing drugs. As I became a teenager and accepted Christ I started to stand up to him more; then one day he just left. My mom went from being thankful he was gone, to missing him dearly and blaming me. Without his support we lost our home and our car. We ended up having to move in to my Aunt's already crowded home. I wanted my mom to accept her responsibility as a parent, to start new, but instead she was just devastated and went looking for more validation from men. I was angry and so when she got in a domestic feud and suggested we move to a women's shelter, I refused. We had DCFS in an out of lives for years, so at the next court date I was labeled a rebellious teenager and put in to foster care.

I was rebellious, in that I wanted a life completely different from the one my family members had. For as long as I can remember, I was determined not to go down the same path. I was actually a strong student who loved school and was more than determined to succeed - I was going to find a way out! Therefore, I thrived in foster care: I had good friends, I enter sports and clubs, and I was a good student. Doing well, though, meant that they decided I no longer needed services and thus I was told I would be moving back home. My mom and I had spent the last two years spewing words of hate at each other. She blamed me for her failed marriages and I could muster no sympathy for her - I was just disgusted. The place I was moving home to was a tiny two room (not bedrooms, just 2 rooms) apartment. A place were the halls and elevators constantly smelled of pot, piss, and beer. It was far from what I wanted, but I didn't really feel like I had a choice. I felt trapped and like the world was closing in on me.

When I moved home, my mother and I walked circles around each other. Some people who knew me as a child offered to send me to a Christian summer camp; I just wanted to be away from my mom so I jumped at the chance. While there I realized that if I didn't learn to forgive my mom it would eat me alive - I was slowly killing my heart. So I worked on it, seeing her side, trying to realize that she was hurt too. I accepted the fact that she loved me even if she didn't show it they way I wanted. Slowly my heart towards her began to soften.

Being gone a year had also changed some things in my family. My mom and my sisters had learned to adapt, so I was still able to be a pretty normal high school kid. I joined speech, ran cross country and track, took advanced placement classes, and got a job to save for college. I also met some amazing friends. People who embraced me and accepted me for me; despite my sometimes scary mom and home. My mom also started to make compromises, we moved to a new safer place and she learned to be there for my sisters more. My mom and I were not anywhere near close my last two years of high school but somehow we made it work. When I left for college, she knew it wasn't goodbye forever and I knew I had a home to return to. I had seen the Lord work in mighty ways in my life, He had brought me farther than I ever imagined and I prayed/hoped he'd do the same for my mom.

When I was a sophomore in college my mom got pregnant. The father was already out of the picture and I was angry at my mom for returning to her old ways. It brought back past hurts and once again I was tempted to hold on to anger. It was a struggle, but I chose (over and over again) to hand it to the  Lord. I asked for healing and redemption. When the baby, Adrian, was born he had Down Syndrome. I was scared. My mom struggled to raise normal children, how could she raise someone with special needs. This, however, proved to be a turning point for my mom. She started to really seek after the Lord. As a result of this she has found value in herself; she no longer seeks men to define her. She has set goals for her future and has even decided to go back school. She has grown as a mom and I have seen her be there in ways for my siblings that I would of once considered an impossibility. 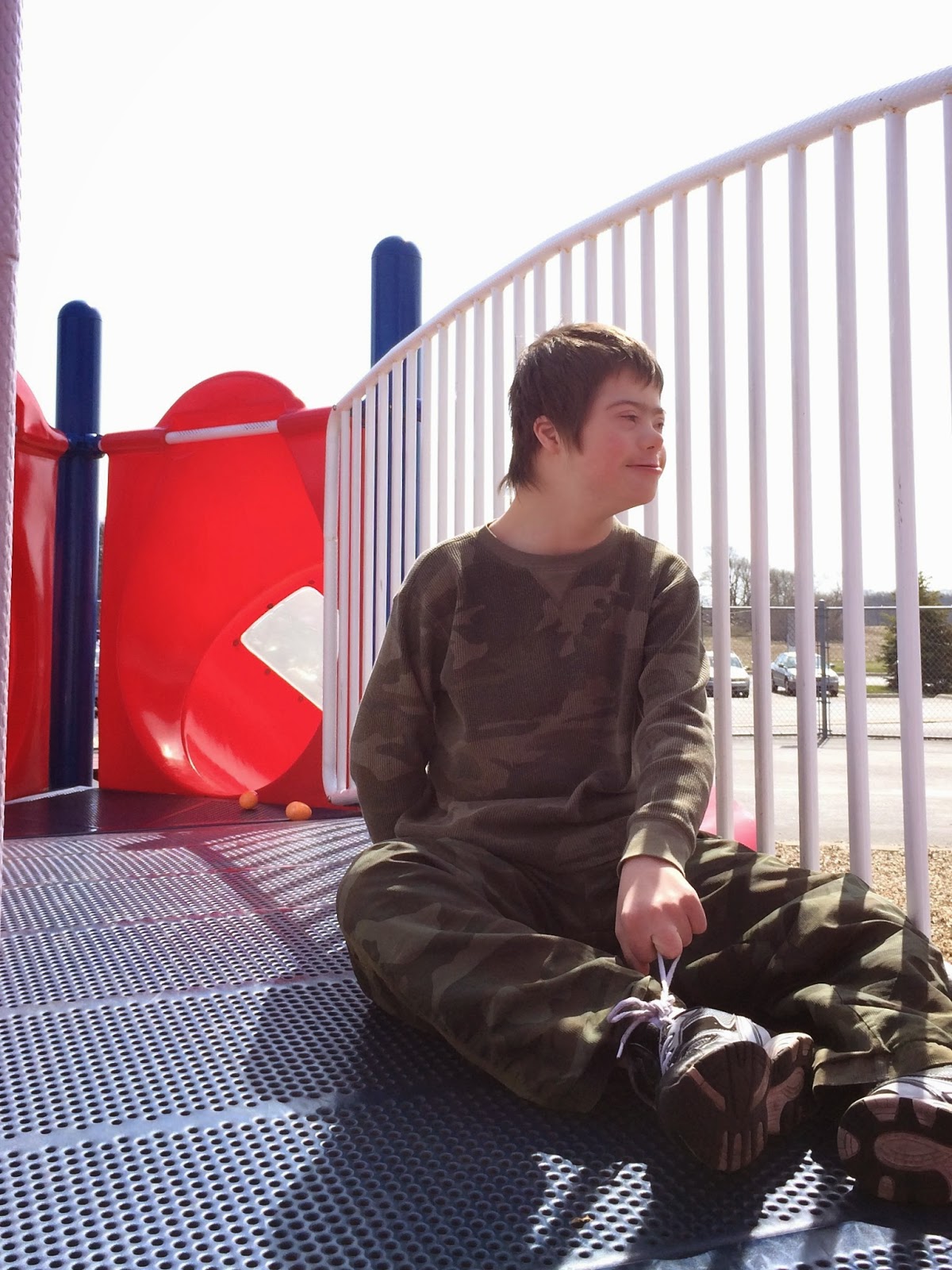 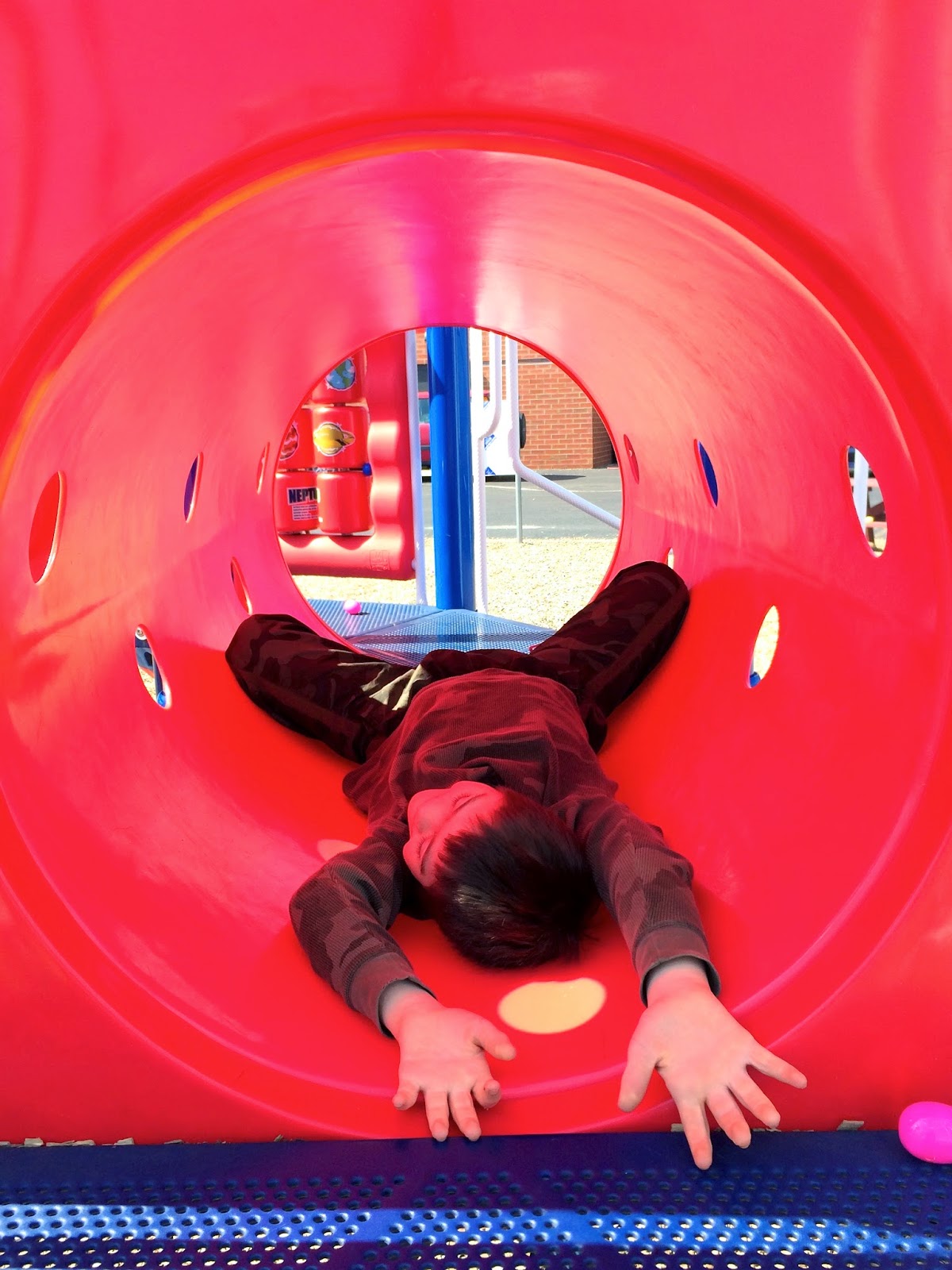 This past Easter wasn't perfect, there were still struggles and tense moments. Moments where I still had to choose to seek forgiveness and to not let judgement take over. There has, however, been so much healing. Jesus has taken something that I saw as broken, something I was ready to discard and He's redeem it. It may seem trivial but I fifteen years ago I was certain, that unless forced my mom would never be a part of my life, let alone my holidays. The Lord has done a great work on my mom's life, and I'm thankful for that. However, I am even more thankful that he's done a great work on my life, on my heart. Salvation is wonderful but I'm more at awe of His ability to redeem, even here on Earth. That He can take a heart that was once broken and full of hurt, and make it soft - ready to love again. 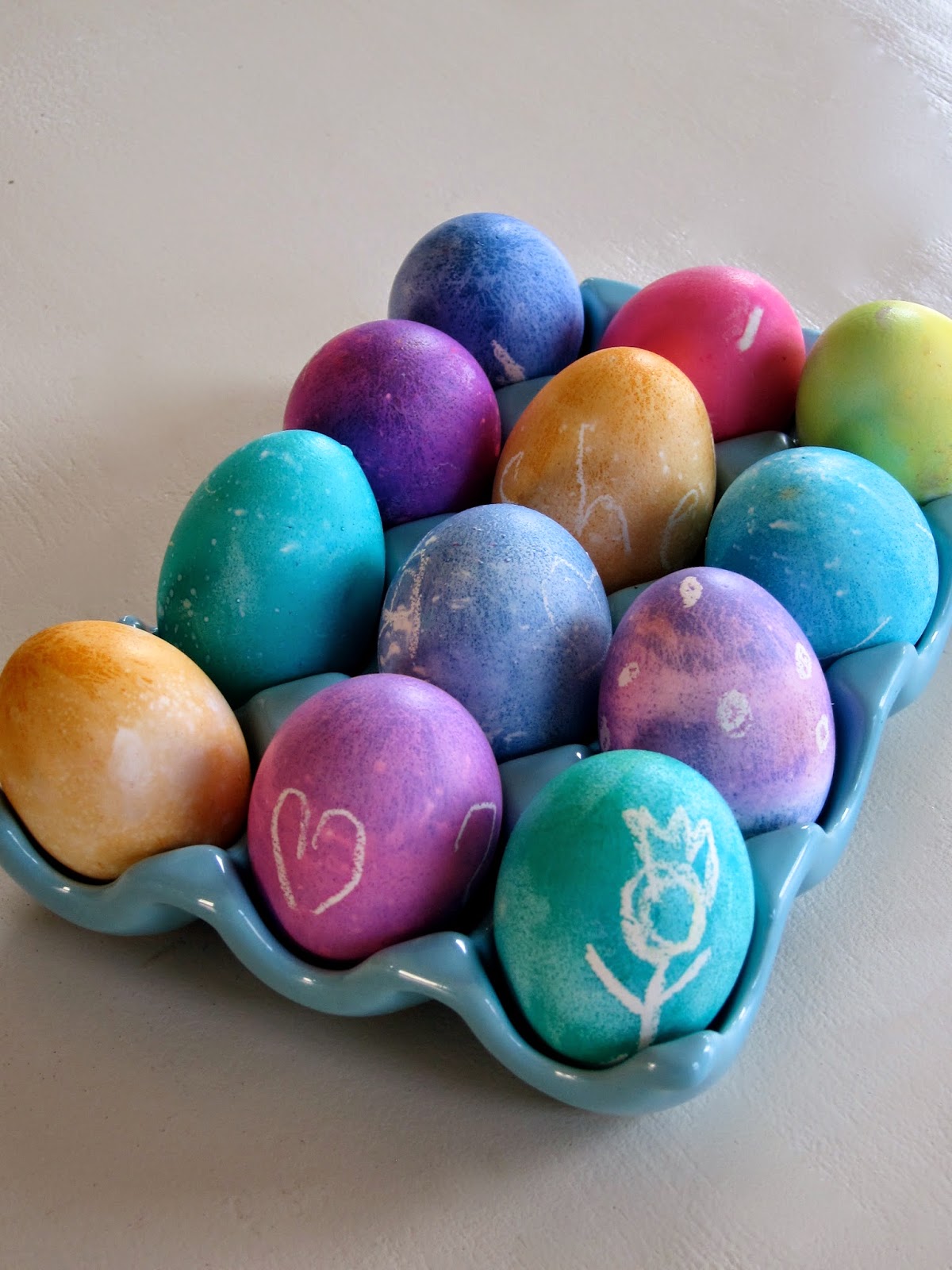 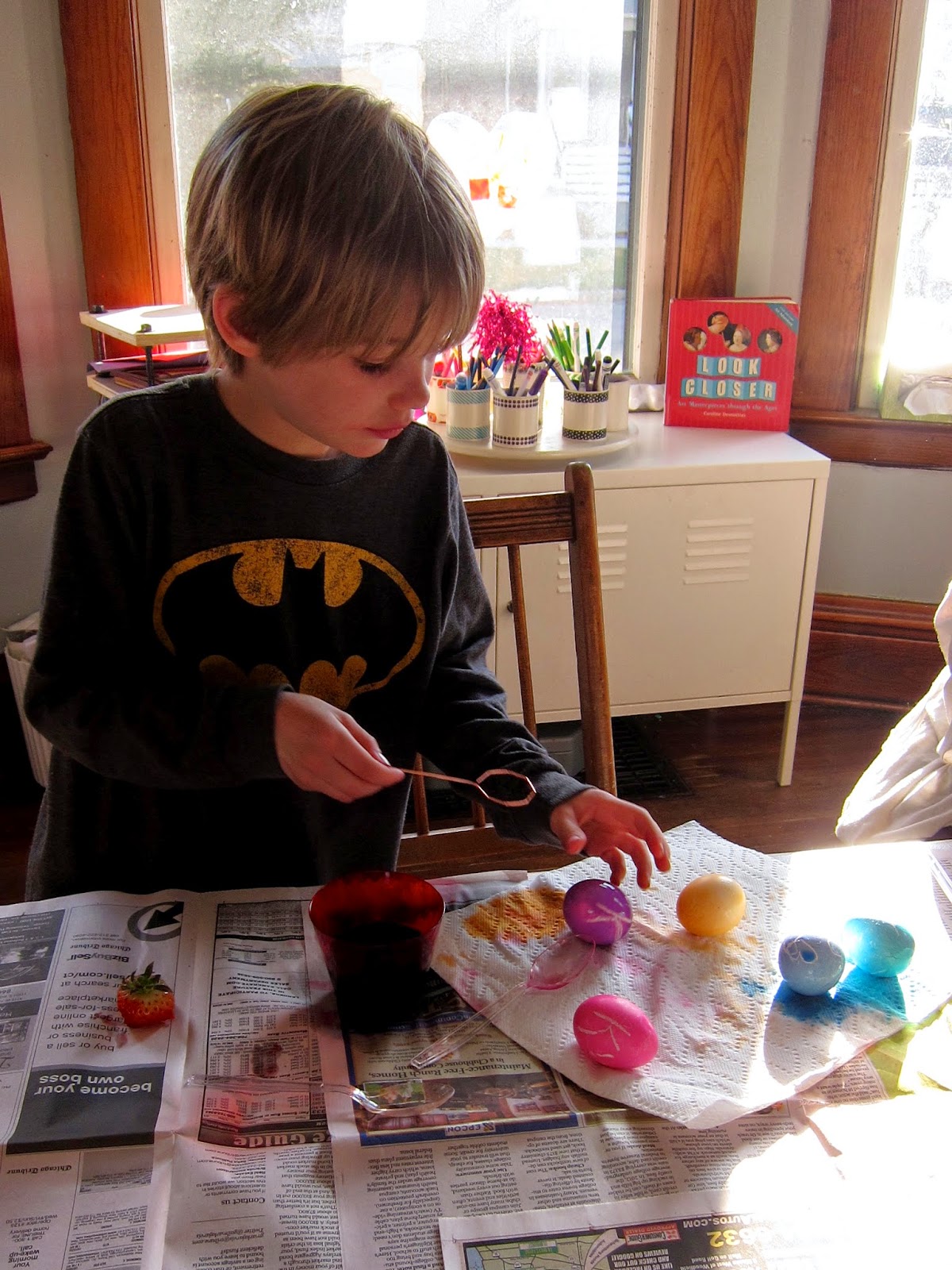 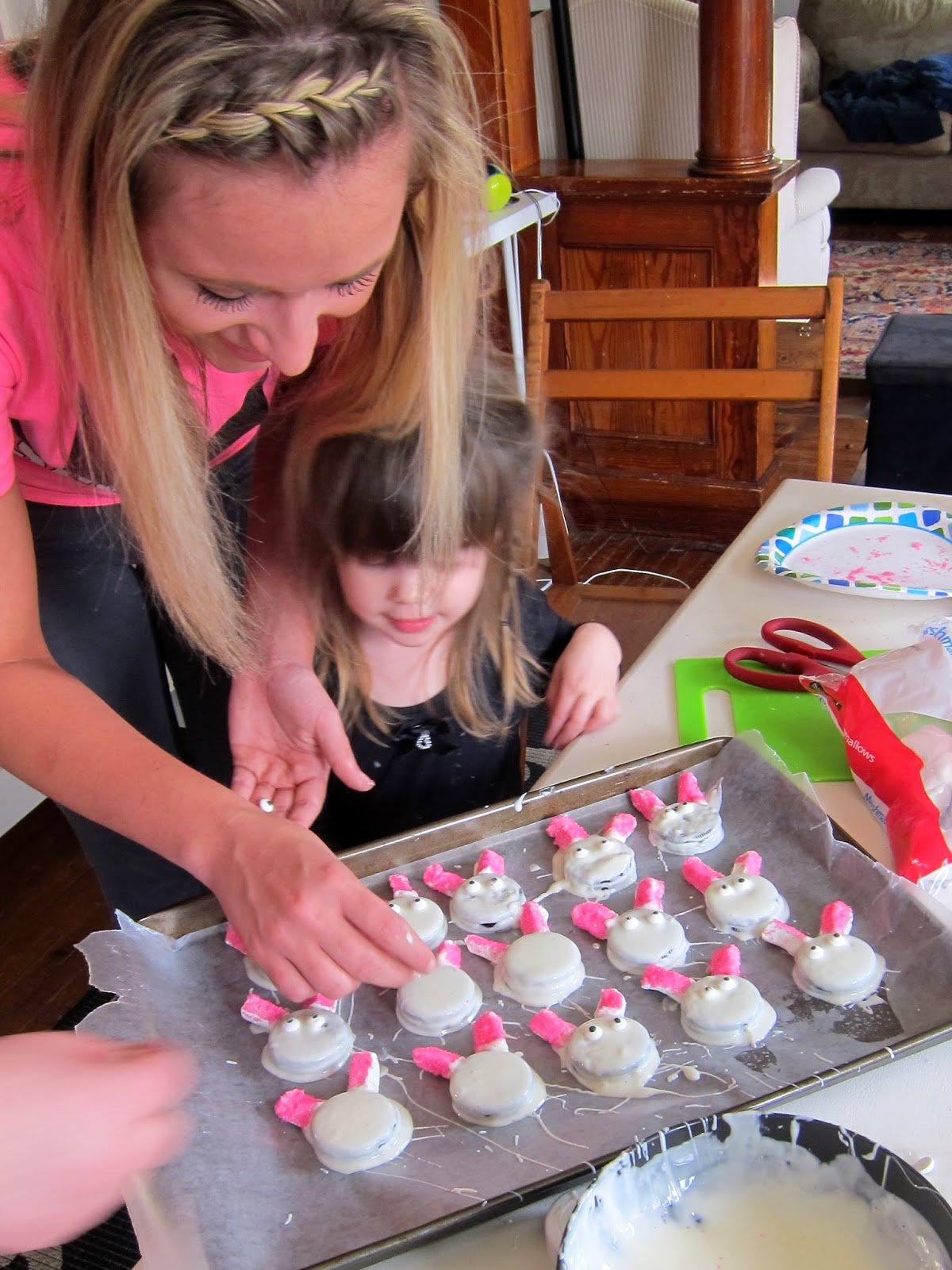 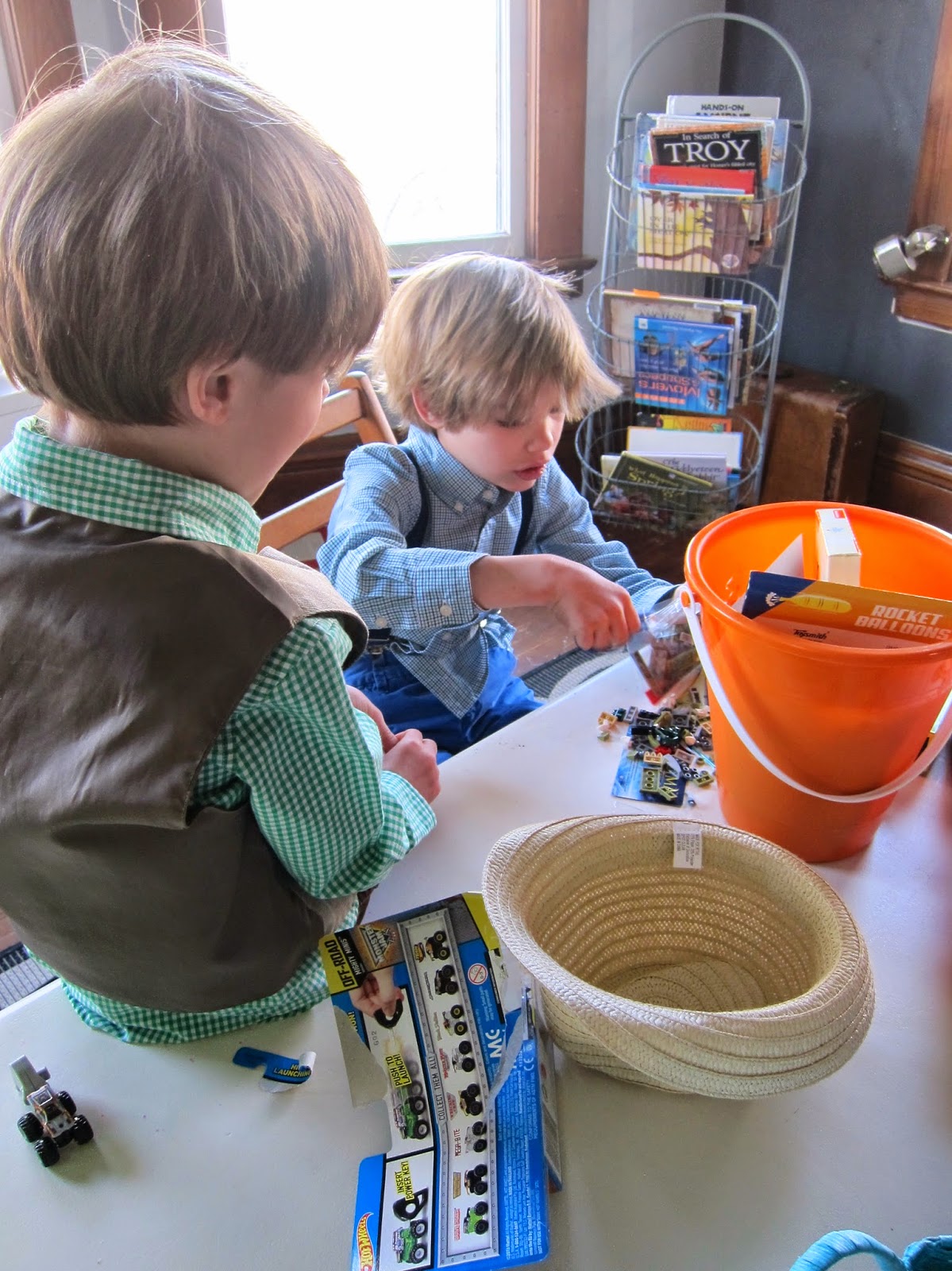 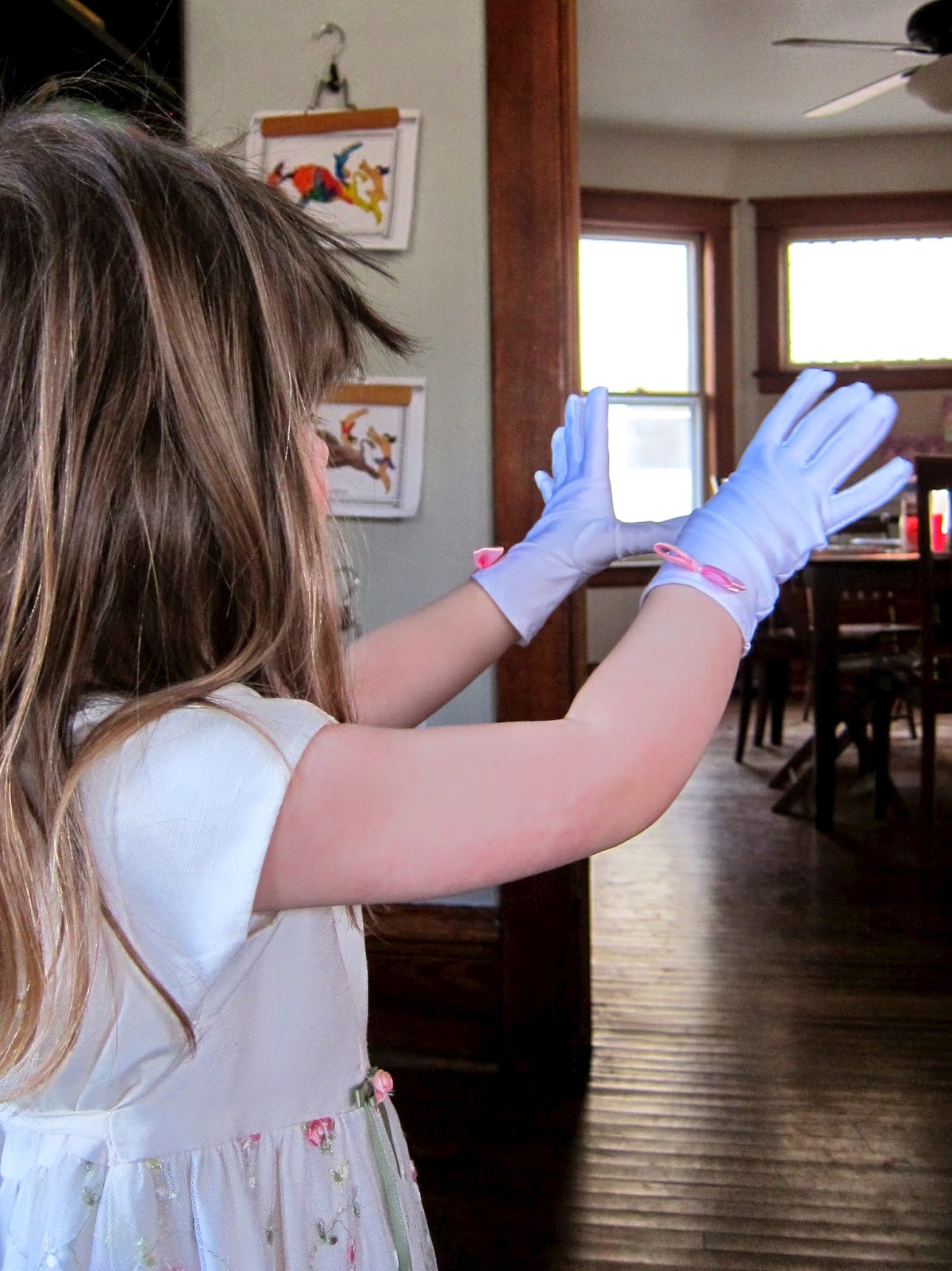 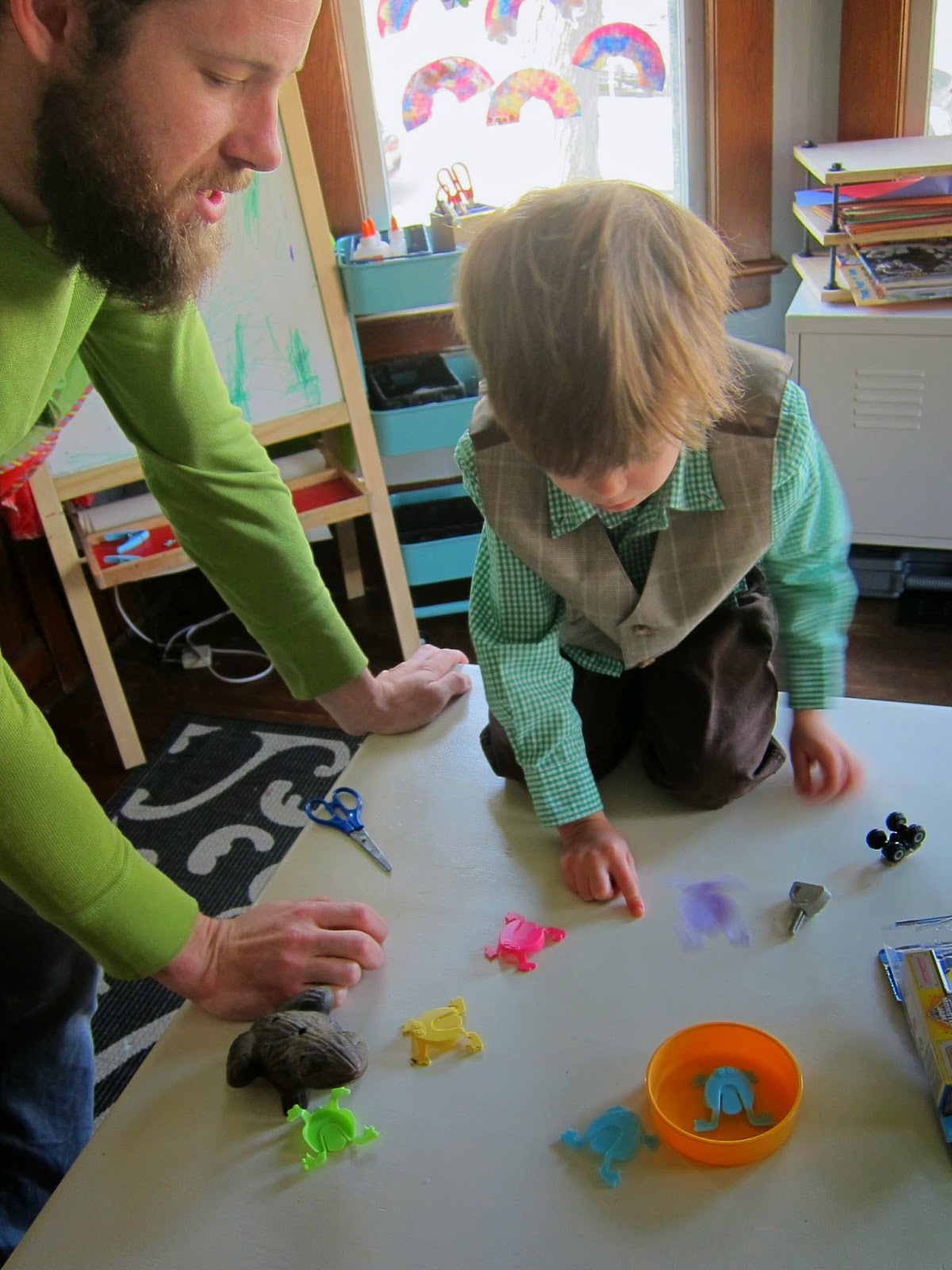 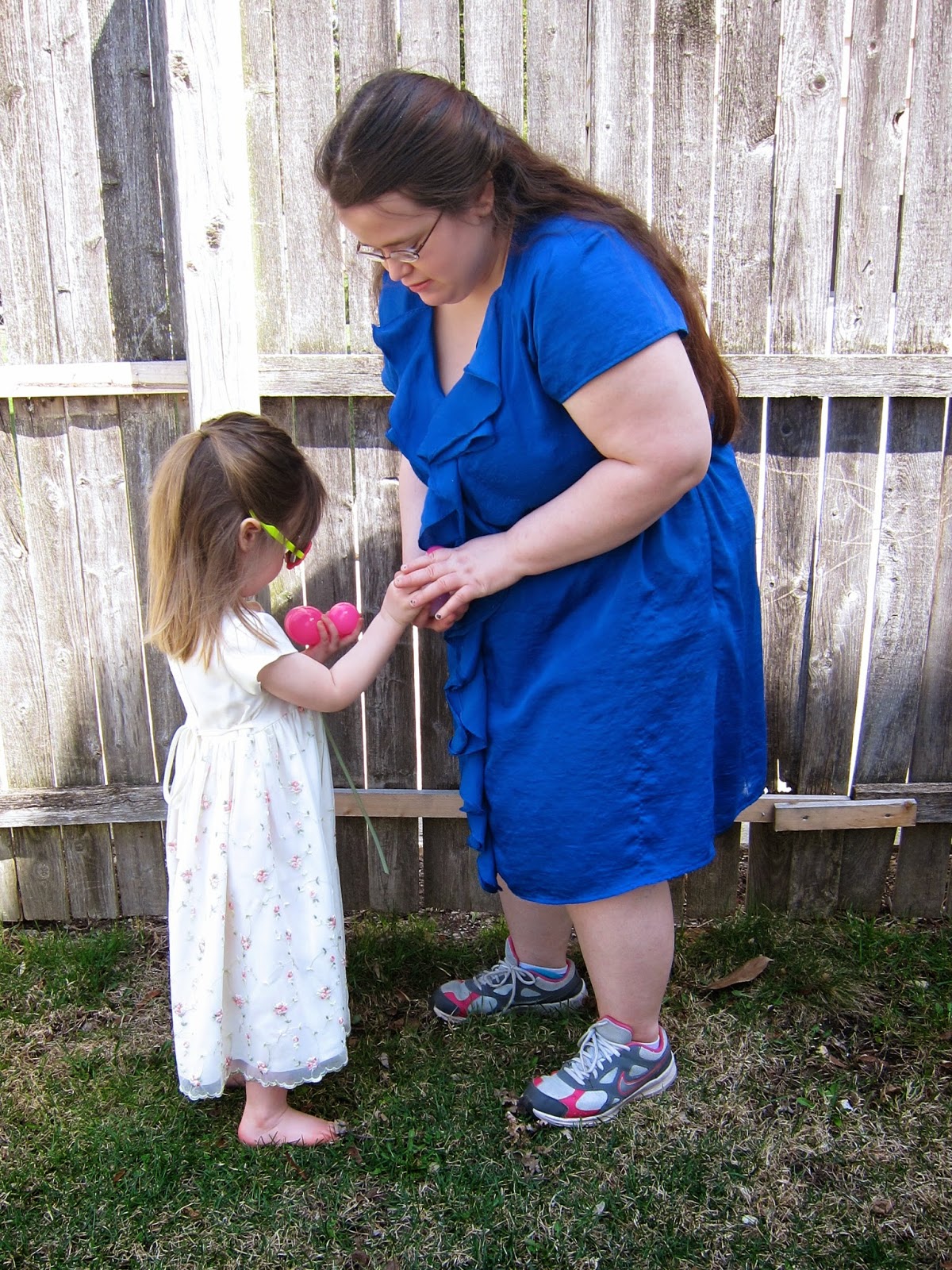 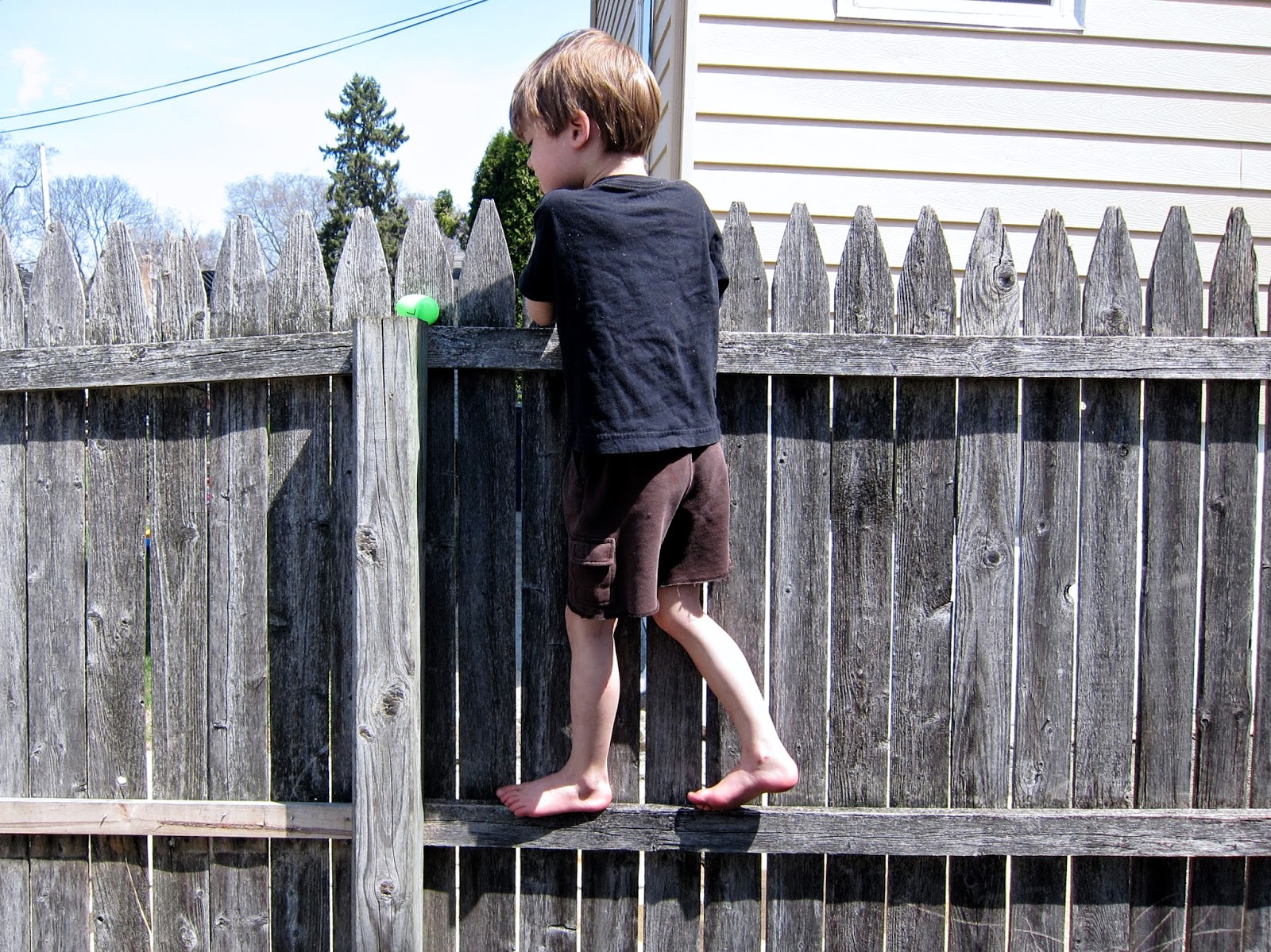 August 22, 2013
This past Saturday we had a joint birthday celebration for Big Buddy (6) and Mini Man (4). They have both been intrigued with knights and dragons for a while now so that's the theme we chose.

Papa and Maca Lindsey were gracious enough to let us host the party in their backyard/secret garden, it was the perfect setting.

In leu of traditional party favors, we outfitted the party guests with a sword, surcoat, and shield. Everyone's surcoat and shield was emblazoned with their sigil/initial.

The shields were also our party craft. They are cardboard which Jeremy cut with a laser cutter. I then hot glued and taped (double reinforcement!) ribbon on the back for handles. The kids used dot markers to decorate the shields. This worked out really well because the cardboard absorbs the ink so fast that drying is almost instantaneous.


In addition to the shields we also had a few other themed activities: a dragon catapult, sand castle building, a row of balloons for sword practice, and t…
5 comments
This post is a long one, click thru to see more »