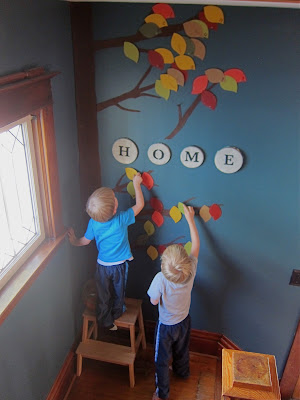 While we were fixing up our schoolroom I spotted some uniquely shaped paint chips at Home Depot that I thought they would make great fall leaves. Since we were stocking up on other paint supplies I didn't feel guilty grabbing a bunch.

I wasn't sure how we'd use them at first but after a little thought I decided to make a tree from which the leaves could hang and "fall". I used a couple 50%-off coupons at Jo-Ann Fabrics to buy a yard of brown felt and a roll of adhesive hook velcro.

I had originally just planned on cutting the felt into a simple tree about three feet tall but when I told Husbandie my plan, he took over and came up with something much cooler...

While he was working on the tree I cut squares of velcro and stuck them to the paint chips.

The kids have a lot of fun just pulling off and putting on the leaves. I wanted to capitalize on their excitement so I made up a few learning games.

1- Each player chooses a color and hangs up fifteen of that color's leaves. The players then take turns rolling a dice to see how many leaves they can take down. The player to remove all their leaves first wins.

2- I stenciled lower case letters on some of the leaves. Depending on the child, I either call out a letter name or say a word and then they identify it's first letter on the leaf. 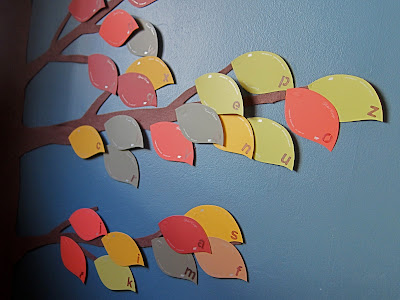 3- This game is only for Big Buddy. I wrote number words on some leaves and he finds the one that matches the numeral, or set of objects, I show him. 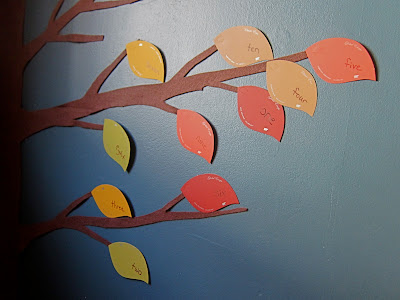 We've had our tree up for about a week now and the kids play with it everyday. I'm really pleased with how well it turned out - Husbandie made it much prettier than the picture I originally had in my head. They only thing I would do differently is have him make some of the branches a little thicker; a bunch of leaves can weigh the thin ones down, or the velcro can pull them off the wall so they need to be re-taped. It's a small thing but something I thought I'd share in case you decide to make your own.

November 02, 2011
Normally I'd do a Dr. Seuss unit in March around his birthday. We had to do one now though because on Saturday Big Buddy and I going on a date to a  Dr. Seuss exhibit . The exhibit is only at the museum until January and I'm afraid if we don't go now we might not get the chance. We are of course reading lots of Dr. Seuss's books. A great advatage to studying Dr. Seuss in November rather than March is that all his books were available at the library. I also found a great children's biography which is perfect for preschoolers. Pebble First Biographies: Dr. Seuss  We've read it a couple times and Big Buddy loves reciting all the facts he's learned WRITING CENTER ADDITIONS big buddy's name in sand paper letters, coloring pages  & mazes from seussville.com skills practiced: fine motor, letter recognition, creativity,  reading comprehension LEARNING "TRAYS" -   I rotate these, setting out about four a day from which the boy&#
179 comments
This post is a long one, click thru to see more »

October 30, 2011
We've finished our farm unit and are moving on to a new theme tomorrow - but before we do I wanted share the barn we made. The wooden farm animals came with a beautiful handmade ark that we gave Big Buddy for Christmas a couple years ago.  I would someday love to have a wood barn but it's currently not in the budget. So in the mean time we decided to improvise and make our own.  I stumbled upon this perfectly sized milk box (4 gallons per box) while subbing and thought it would be sturdy enough to handle play. Hubandie and the boys used an x-acto knife and wood glue to build a barn shape. to get the doors to fold out hubandie used an x-acto knife and scored the inside of the cardboard We then painted with a basic primer and outlined a window and a door with painters tape. cardboard is very porous so priming is a must if you want decent coverage Big Buddy however insisted that we add more windows so it looked like the barn in our book The Big
119 comments
This post is a long one, click thru to see more »

Jack-O-Lanterns on the Fridge

October 03, 2011
Last fall I saw the idea for refrigerator pumpkins with face pieces in FamilyFun Magazine  and have been anxious to recreate them ever since. It was pretty quick and easy and since the only thing we didn't have on hand was magnetic sheets ($1.50 with coupon at Joann's) it was also very cheap. my supplies: magnetic sheets, orange & black construction paper, white pen, tacky glue *i know they have self adhesive sheets but my Joann's didn't carry them   glued (very messily) and ready to cut Both the boys were quite enthused when they discovered them after rest time :) Hopefully it will keep them entertained until we carve real pumpkins.
416 comments
This post is a long one, click thru to see more »