July 29, 2011
So a couple weeks ago I pinned this picture on to one of my Pinterest boards.  If you don't know what Pinterest is you should, and you can learn all it about here.
This isn't really that surprising. I have a big fascination with pixie cuts.  I look them up on line, cut them out of magazines, and frequently elbow husbandie when I see them on the street. What is surprising is that yesterday I did this... 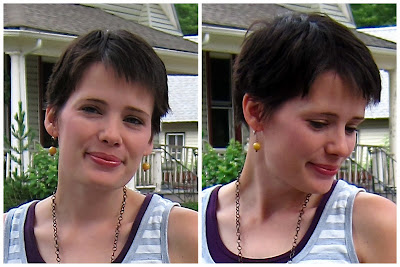 I've been saying for almost a decade now that I was going to get a pixie cut and I have come close several times.  It usually ends up with me having a short-but-not-quite-short-enough cut. This time I was determined not to chicken out, to cut it all off.  Husbandie actually thinks I could of gone a little shorter, but I feel successful.  It's going to take some getting use to and I am thinking that I might be mistaken for my four year old son. But mostly, I'm really pleased and glad I can finally say I had the courage.