December 19, 2011
In our family Santa isn't really a part of the Christmas season. We do not have any strong feelings against Santa Claus, we just decided that he wasn't going be something we included in our family traditions. There are so many things husbandie and I love to do during Christmas time, so our energies simply go elsewhere - there just isn't time left for Mr. Claus. This year, however, Big Buddy started to express interest in Santa so I decided to teach him about St. Nicholas.  The book The Legend of St. Nicholas has been a great resource. Not only did it explain who St. Nicholas was, but a boy in the book (also named Nick) learns from St. Nicholas's example and takes great joy in giving gifts to others. 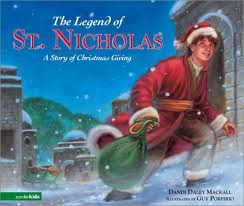 Every year husbandie and I buy gifts for a few less fortunate children and this year I decided to include the boys. I explained to them that they were getting to be "Santa" for some other children. In order to be Santa though, Big Buddy insisted that he needed a hat. I didn't want to spend money on one so we made do with what we had on hand.


The boys went shopping with me to pick out the gifts. I was pleasantly surprised by the experience - neither of them asked for toys for themselves or to play with gifts we bought. They genuinely seemed excited about giving to other children. 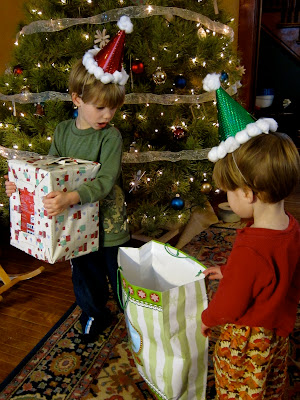 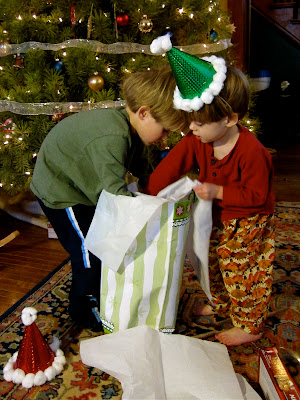 The boys enjoyed playing Santa so much that I'm sure we'll do it again next year.  We might even buy some real hats :).