Preschool Fun with "The Snowy Day"

January 22, 2012
One of my favorite winter-theme books to share with preschoolers is The Snowy Day.  This year the book celebrates it's 50th anniversary and has quite a impressive history; not only is the book a Caldecott Medal winner but it was the first children's book to have an African American child as it's main character. But the story is by no means political, instead it is a sweet tale that, in my experience, all children enjoy hearing. 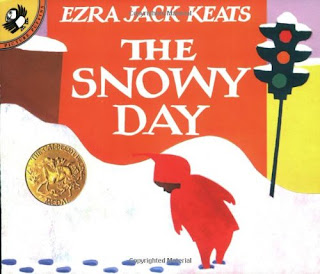 One of my favorite parts in the book is when Peter makes different types of tracks in the snow so I thought it would be fun to have the boys make their own snowy-tracks pictures.


Big Buddy was most intrigued by Peter's disappearing snowball so we also did a little snow/ice melting experiment. I used a Wilson silicone mold to make snowflake ice cubes. We then took four ice cubes, covered one in salt, one in sugar, put one in mitten, and used one as a control. Big Buddy hypothesized that the ice cube covered in sugar would melt the fastest - I guessed salt :) As we watched, the salt-covered ice cube did melt the fastest but the sugar was a pretty close second. We were both surprised that the ice cube in the mitten was the last to melt.

Lastly, I used pictures from a lap book I found at Homeschool Share as sequencing cards.

Looking for other winter kid themed activities? Be sure to check out our winter themed preschool syllabus and our homeschool page.