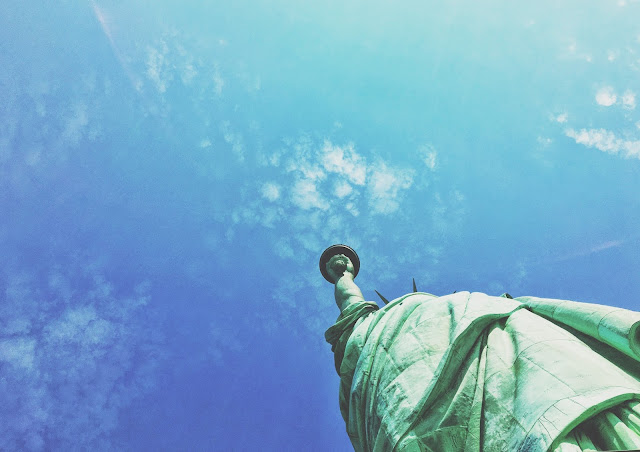 This current political season has left my heart heavy. Everything has become so polarized and I feel like there are few (or at least few people in the public field) who share my sentiment. I am a misfit in both the conservative and the liberal camp.

I, however, am also unequivocally pro-life. There is no situation where I could ever see myself seeking an abortion, and if a friend came to me with an unwanted pregnancy I would do all I could to encourage her to carry the child to term. I don't judge women who have or will seek abortions. I don't think they are 'evil' or that they take the decision lightly. My heart breaks for them; they are obviously in a moment of hopelessness.  Because of this I'm prolife but not 100% anti Roe v Wade. Confusing, right? The thing is, I can't solve this hopelessness. Women are still victims of sexual assault, single/young mothers are still stigmatized and not supported, and because we live in a fallen world, not all pregnancy go smoothly. I can say I'd never have an abortion because I have the hope of Jesus. I, however, do not feel qualified to make that choice for those who do not have that hope.

I'm feminist but I think equality should make us better - more noble! Not drag us down or give us freedom to indulge in our base nature. Human society has not done a very good job of holding men accountable for the results/consequences of their sexual promiscuity. The burden has fallen on women. We've seen the 'freedom' that men have and desire it - actions without consequences. Does this really elevate us though? Sex is wonderful, but humans are more than physical...sex should be emotional and spiritual. By dumbing down sex and making it easy and carefree we are doing a disservice to ourselves. Equality should raise the bar, not lower it!

This view should make me feel pretty comfortable in the conservative ring, right? I said I'm pro-life, though, not just pro-birth. To me being pro-life means that I'm also pro-immigrant, pro-refugee, pro-minorities, pro-living-wage, and pro-affordable healthcare. All the sudden the conservative camp doens't feel so welcoming.

I'm a Christian, and not a laissez faire Christian, but a born again, "Jesus is my only hope" Christian. While watching Christians' handle this political climate, though, I find my stomach in knots. When Franklin Graham said, "In the Bible rain is a sign of God's blessing, and it started to rain, Mr. President, when you came to the platform." I groaned. Yes, there are places in the Bible where rain is called a blessing...

I will bless my people and their homes around my holy hill. And in the proper season
I will send the showers they need. There will be showers of blessing. Ezekiel 34:26

Mr. Graham, however, is taking verses out of context. Instead of turning to the Bible to see what God says, he's twisting scripture to make his own point. When the Bible talks about rain being a blessing it's talking about agricultural, rain needed for crops and livestock. It's a blessing of provision not a symbol of favor like Mr. Graham alluded too.

Today on Facebook I also saw a post where a Christian writer was calling Melania Trump a Proverbs 31 woman. This is one of the highest compliments you can give a Christian woman. I strive to be a Proverbs 31 woman and often fall short, as do most of the Christian women I know. There are a lot of qualities that go into being a Proverbs 31 woman but I would argue that the most important quality is fearing God and thus striving to keep all of His commandments. I'm not saying Mrs. Trump is not a Christian, she may very well be trusting in Jesus for her salvation. Her life, however, does not show the marks of fearing the Lord.

If it really comes to it, I have nothing against Melania Trump. My problem is Christians who are so anxious to gloss over truth (i.e. lie to themselves and others) because they feel like they finally have a president who will fight for them. We as Christians are suppose to stand up for the truth, even when it is hard...even when it means we can't wrap up our world/point of view and put it in a pretty little bowed box.

Therefore, having put away falsehood, let each one of you speak the truth with his neighbor,
for we are members one of another. Eph 4:25

Do not lie to one another, seeing that you have put off the old self with its practices
and have put on the new self, which is being renewed in knowledge
after the image of its creator Col 3: 9-10

As a Christian I believe that God is sovereign and nothing happens outside His will. The Lord allowed President Trump to win the election...this, however, also means that he allowed President Obama to win in 2008 and 2012.

Let every person be subject to the governing authorities. For there is no
authority except from God, and those that exist have been instituted by
God. Therefore whoever resists the authorities resists what God has
appointed, and those who resist will incur judgment. Romans 13: 1-2

It's complicated too because God's will is not ours, His will is eternal not temporal.  God's sovereign will also allowed Kim Il-sung to become supreme leader of Korea in 1948 and Hitler to become chancellor of Germany in 1933. I'm not saying Trump is anything like these men; he has done nothing to deserve that comparison. My point is that Christians can't cry, "this must be God's will and provision" and then twist truths and lie to themselves to make it all fit.

First of all, then, I urge that supplications, prayers, intercessions, and thanksgivings
be made for all people, for kings and all who are in high positions,
that we may lead a peaceful and quiet life, godly and dignified in every way 1 Tim 2 1-2

As a believer I will pray for President Trump. I will pray for wisdom and guidance. I will pray that he is a successful president. That jobs and the economy will grow under him. That our country will be united and know peace. I will also praise him and give thanks when I see him being a leader with integrity. For instance, when he treated the Obamas and the Clintons with respect during the inauguration proceedings. Or when he tweeted, "peaceful protest are a hallmark of our democracy...I recognize the rights of people to express their views."

It doesn't mean, however, that I will claim he is something he is not. That I will idolize him and justify his sins. I also won't be silent when I hear lies or half truths. Most importantly, it means that I won't be silent when I see oppression. No matter who our leader is I will continue to be pro-life...for the unborn, for the miniority, for the immigrants, for the refugees, for the poor. I will continue to refuse to boil down my faith to two main talking points!

It's not very often that I spill my thoughts on the blog like this, but my heart is burdened...thanks for bearing with me.

*photo is from unsplash.com