Our March and April Morning Basket

May 22, 2018
It doesn't always go smoothly and it's hardly ever quiet, but starting each day with morning time has become my favorite part of our homeschool routine. I have hopes that someday there will be less spills and less interruptions, but right now, I'm just enjoying the little bit of goodness we get to dive into each morning...even if that goodness only lasts for five minutes. 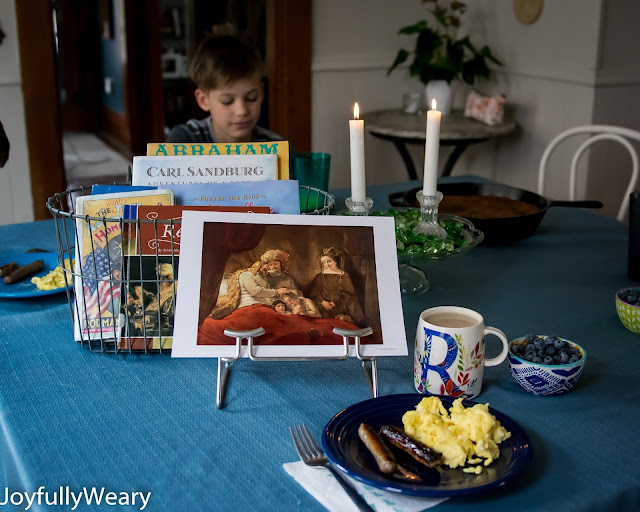 Originally, my plan was to study a new composer, artist, and poet each month but that just wasn't giving us enough time. While I'm not expecting any sort of mastery; I want my kiddos to feel a familiarity with these greats - to almost start to think of them as friends. 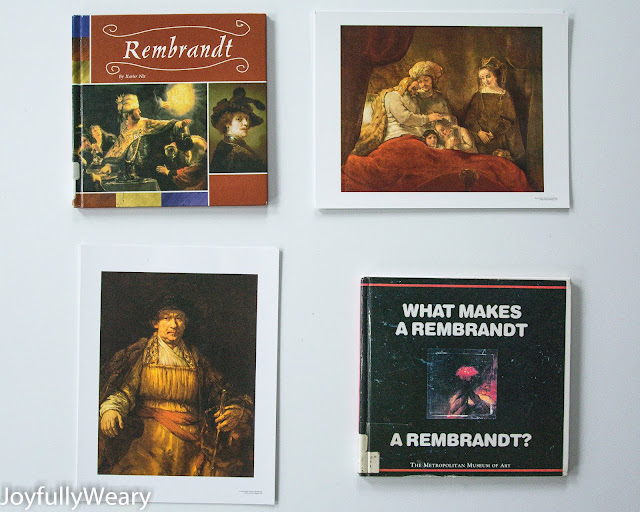 Rembrandt was our artist. The prints are from Simply Charlotte Mason. You can also get lesson plans to go with them, but I just order the prints and read a couple biographies. The biographies we read were Rembrandt (Masterpieces: Artists and Their Works) and What Makes A Rembrandt a Rembrandt. The later was our favorite. Each page-spread told a bit about Rembrandt's life while also describing one of his pictures and the techniques he used. 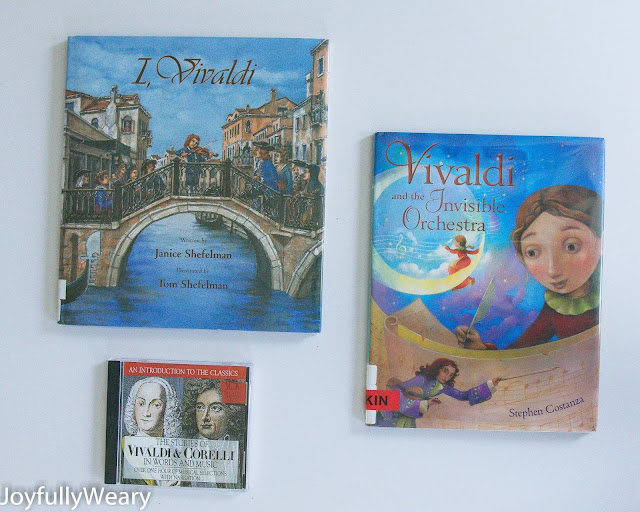 Vivaldi was our composer. We really enjoy the audio cds, by Vox Music: An Introduction to the Classics. They intertwined  a kid friendly biography with music by the composer.

I, Vivaldi is a a colorful picture biography told from Vivaldi's perspective. It drew the kiddos in and made Vivaldi come to life. Vivaldi and the Invisible Orchestra, is a fictional story of a orphan girl who transcribes Vivaldi's orchestra pieces. It is, however, based on a bit of fact; Vivaldi did instruct an orchestra made up of orphan girls. 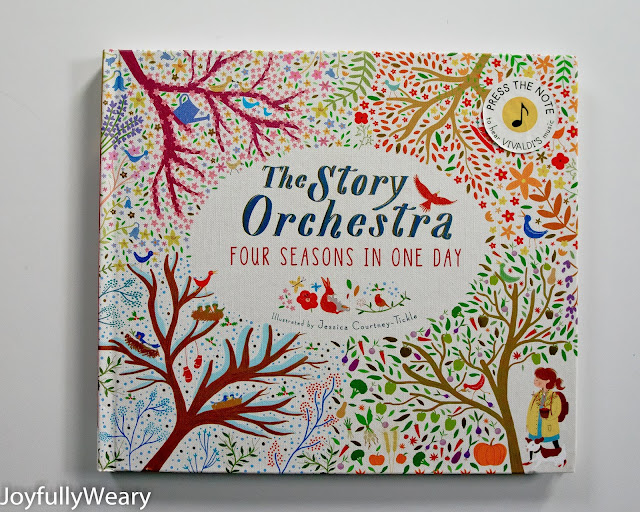 The Story Orchestra; Four Seasons in One Day is not a biography; it is a cute story about a girl and her dog as they experience the four seasons. Each page-spread has a button you can push to hear the music. The last page does include a short biography as well as a breakdown of all pieces your heard in the book. 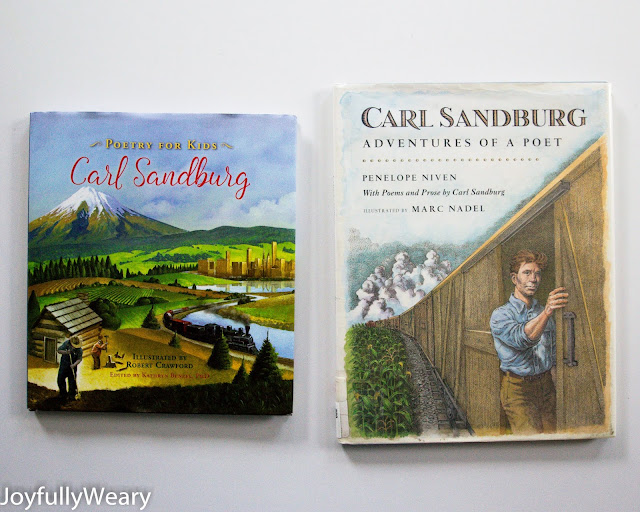 Our poet was Carl Sandburg. It ended up being a happy accident because Sandburg was fascinated by Abraham Lincoln and we were also studying the Civil War. We really enjoy the Poetry for Kids series, so much so, that when we could not get a copy through our library we bought our own. They had other compilations but none that were as good. Someday, I hope to own the whole series.

Carl Sandburg, Adventures of a Poet is a terrific picture biography. Each page-spread  chronologically walks you through an era in Sandburg's life and combines it with a piece of his written work. The historical illustrations are also captivating. 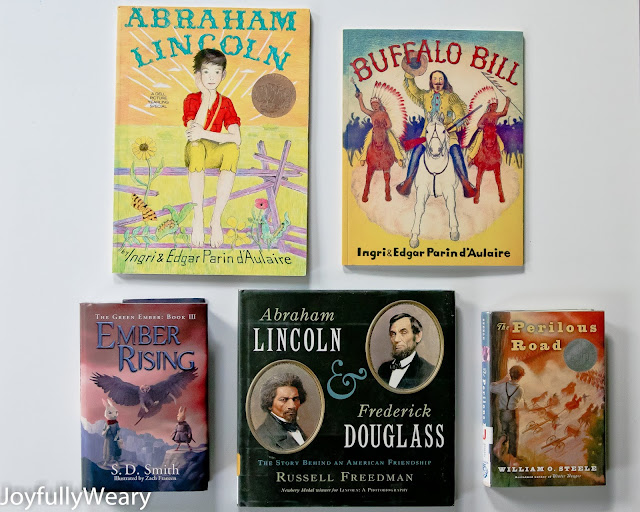 For one of the kids co-op classes they had a history heroes day; each of the kids had dress up or make poster about their hero. Josiah chose Abraham Lincoln; click here to see him recite the Gettysburg Address. Mini Man chose Buffalo Bill; you can see his poster here. They individually read some simple biographies but d'Aulaire is the gold standard of picture biographies so even though we've read these before we had to read them again. I feel lucky because these are hand-me-downs from Jeremy's homeschooling days. My mother-in-law is very gracious and is careful not to wear me down with too much advice, but when I started homeschooling she did tell about the wonderfulness of Beautiful Feet Books history through literature collection.

We've been resting for awhile in the Civil War era. My kiddos are still enthralled and soaking up information. Later, I plan to post about all the books we have read, but these are the two we would open-up when morning time was going smoothly and they wanted to sit a listen for awhile longer. Abraham Lincoln & Frederick Douglass: The Story Behind an American Friendship, truth be told,  I wasn't sure about this book; it looked like it might be a little dull. I, however, wanted my kids to know about Frederick Douglass and thought his relationship with Lincoln was fascinating. Once we got into the book though we were all hooked. The kids would ask for one more chapter and seemed to be soaking in lots of goodness. Most of the illustrations are historical photos or politically cartoons from the era. I wouldn't recommended this as your first nonfiction historical book or your first biography on Lincoln, but if your kids are already familiar with the Civil War then this is a great resource.

I thought The Perilous Road offered an interesting perspective on the Civil War. Its protagonist is an eleven year old boy from Tennessee who thinks of himself as a confederate. He's angry at the Yankees because the have confiscated the food he has worked so hard to grow. His brother, however, goes off an join the Union Army. Through the book he see the way war changes people, that people on the other side are not that much different than him, and the horrors of a battle. My boys tend to glorify war. I want them to be men who stand up and fight for what they believe, but I also want them to be people of nuance. Men who can see both sides. Who are never rash to act, because they have weighed the cost.

I cannot recommended the The Green Ember series enough! Ember Rising is the latest book in the series and while it's geared toward upper elementary/middle school kids, I stayed up late one night finishing it because I was so enraptured! My kids are also hooked and would speed through their morning chores so I would read this book to them before they had to start 'real' school. It's packed full of action but is also peppered with truths that had me crying at some parts. This is series that could be read again and again.

Do you have a morning basket? If you do, I'd love to hear what's inside. You can see some of our other monthly morning baskets here and here.