November 17, 2017
It's probably a little late to be sharing these photos, but we had so much fun dressing up as Harry Potter characters for Halloween that I'm going to do it anyways. I can't believe it's already the middle of November! I make so many plans to visit this place...taking pictures and jotting down ideas of what I'd like to share, but time flies by and then the pictures and ideas seem old. Right now family and homeschooling can be all consuming some days. It's a season and one I'm trying to savor and not fight against. As much as I preach to myself, I still struggle to enjoy the moment instead of focusing on all the possible to-dos and what-ifs.

Anyways, back to costumes. This was the first year were everyone dressed up around the same theme. I loved it, and have been throwing out more theme ideas for next year. Nobody seems to be biting though. Harry Potter is a story we all enjoy, and it was easy to find characters that we all wanted to be. 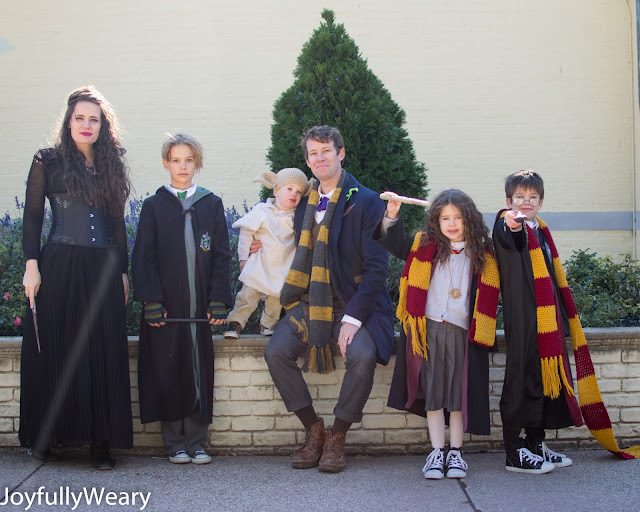 Jeremy went a little off theme and dressed as Newt Scamander - a character from the wizarding world but not from same time-frame as the Harry Potter story. He's a proud Hufflepuff, though, and really wanted to represent his house.  Mini Man was Harry Potter, Big Buddy was Draco Malfoy, Little Lady was Herimione Granger, BabyZ was Dobby, and  I was Bellatrix Lestrange. 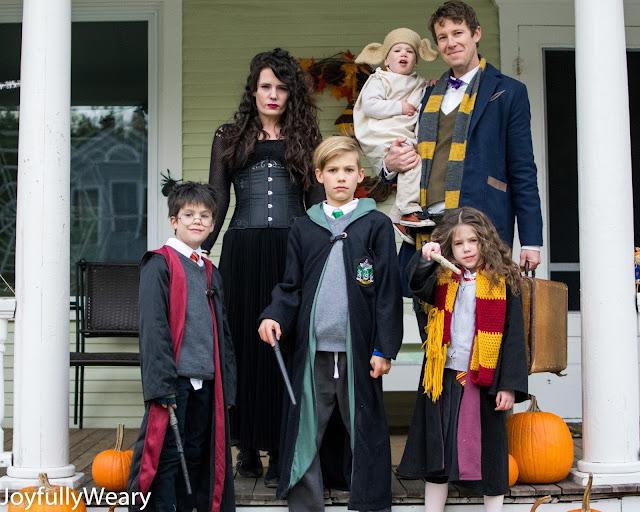 Since we were all so excited about our costumes, I knew we had dress up more than once. So the weekend before Halloween we went to Boo at the Zoo. Maca was able to join us and got into the fun too and dressed up as Trelawney. 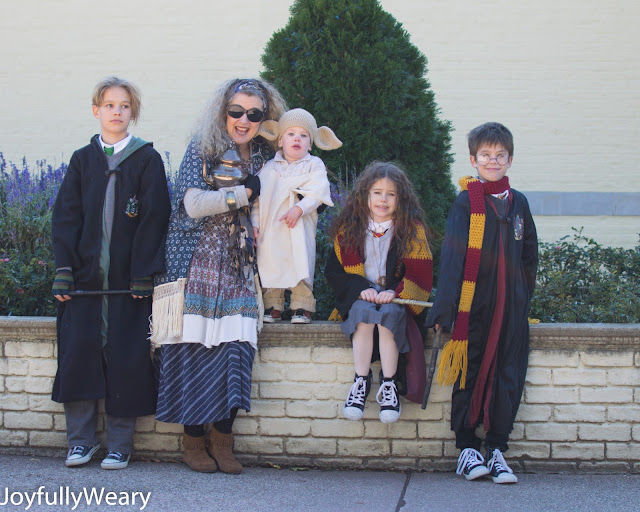 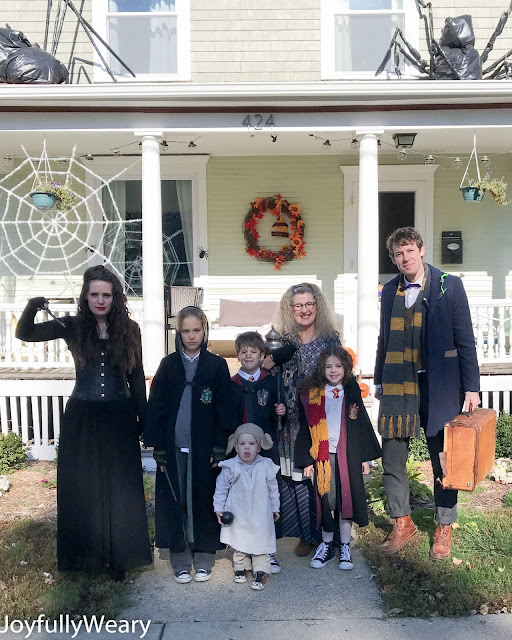 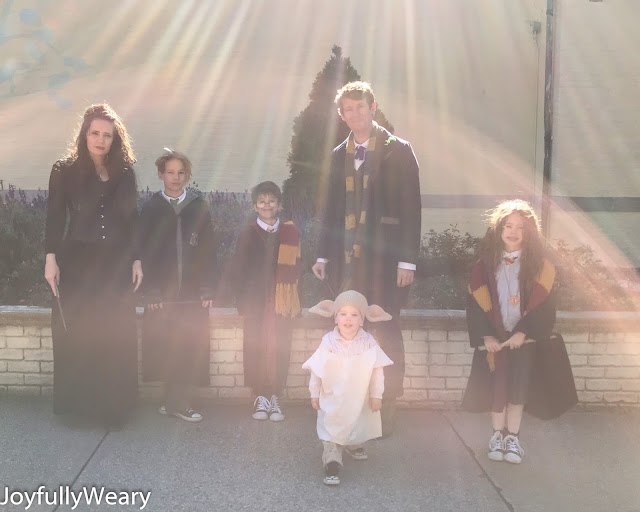 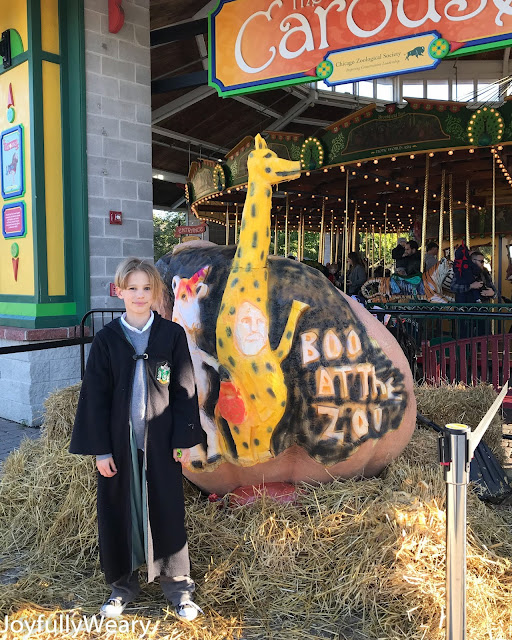 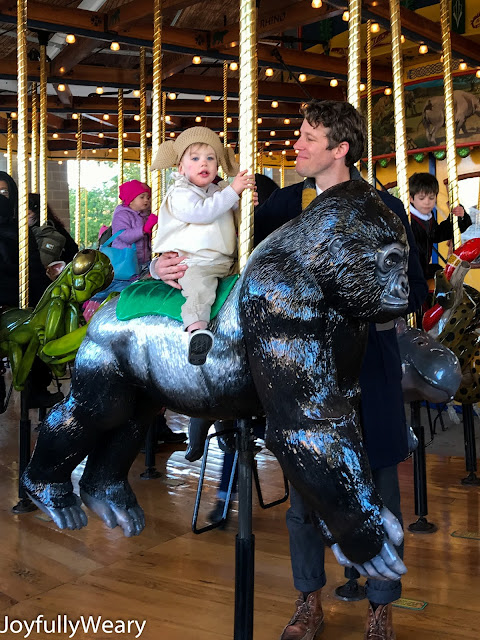 It was a ton of fun and something we definitely plan on doing again next year. It was like a humongous costume party. We enjoyed seeing other families also all dressed up in coordinating outfits. We got a lot of attention for our costumes which left the extroverts in our group (Mini Man) super excited and the introverts in our group (Big Buddy) tempted to hide. 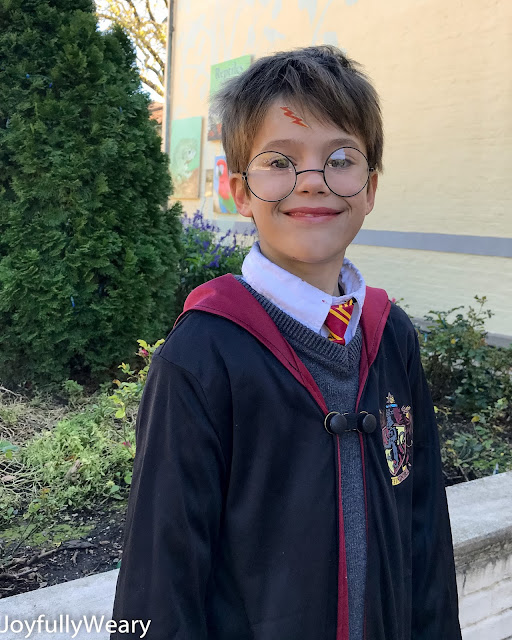 ↑ I may be partial but I think he is a far more adorable Harry Potter than Daniel Radcliffe. 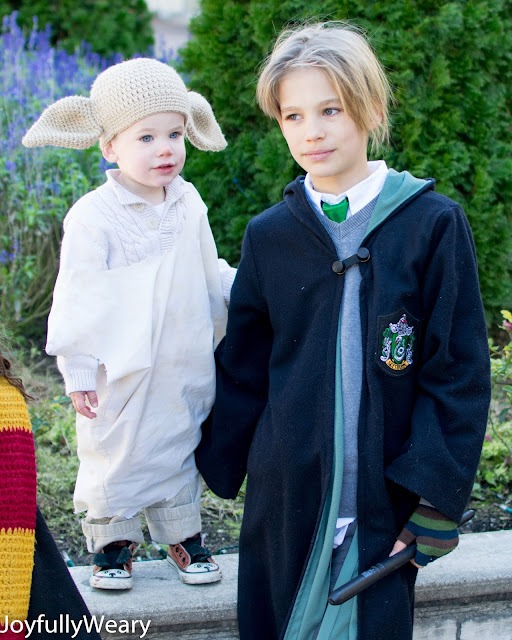 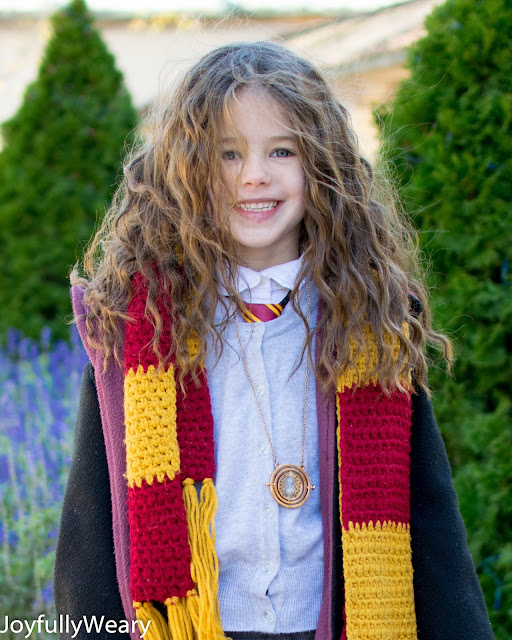 I already shared in the post I wrote about the Hermione birthday celebration our library hosted but Little Lady not only looks like Herimione but also shares a lot of her personality. This girl is tough, loyal, smart, and determined. We all thought Trelawney was the perfect costume for Maca but Little Lady took a bit of convincing, "but Herimione doesn't like Trelawney and I LOVE Maca!?!" 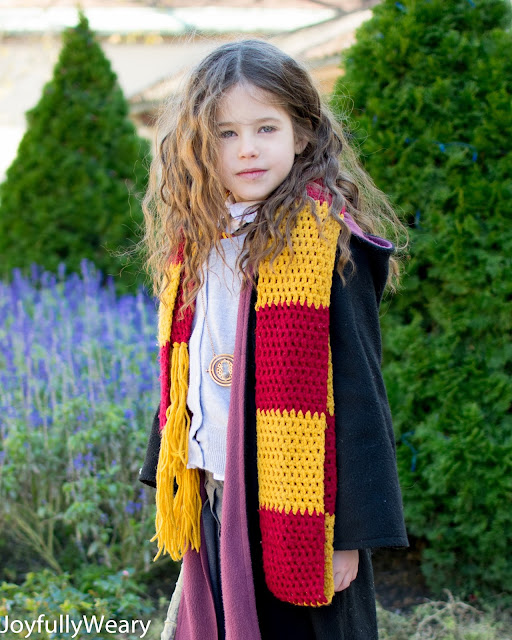 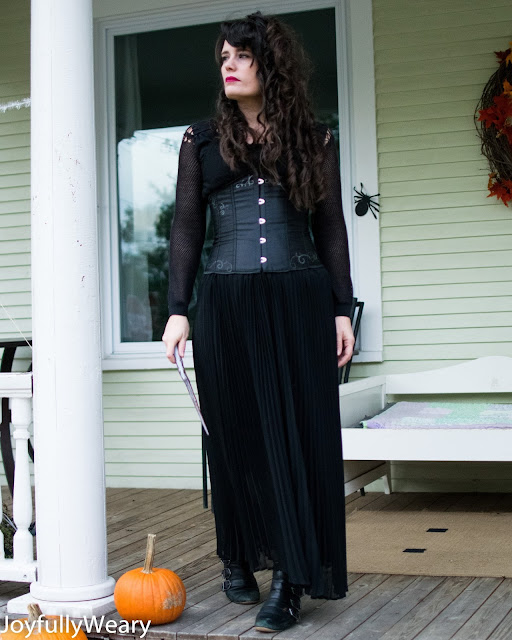 I had so much fun dressing up as Bellatrix. I've always wanted really curly hair and this was the perfect excuse to go through the work to make it happen. It was also the first time I tried contouring - it's a bit addictive. 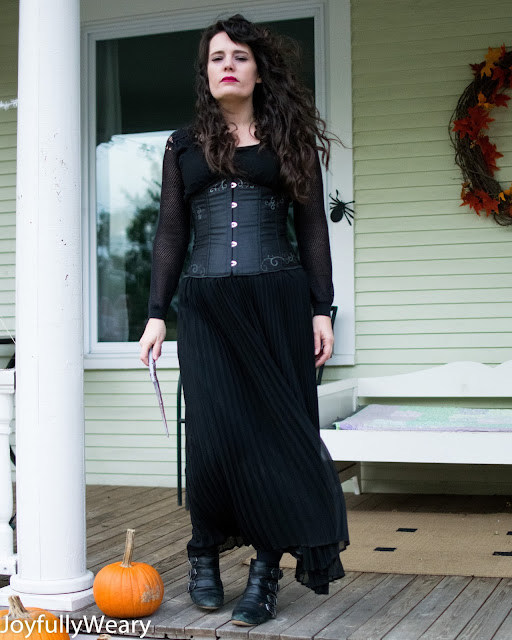 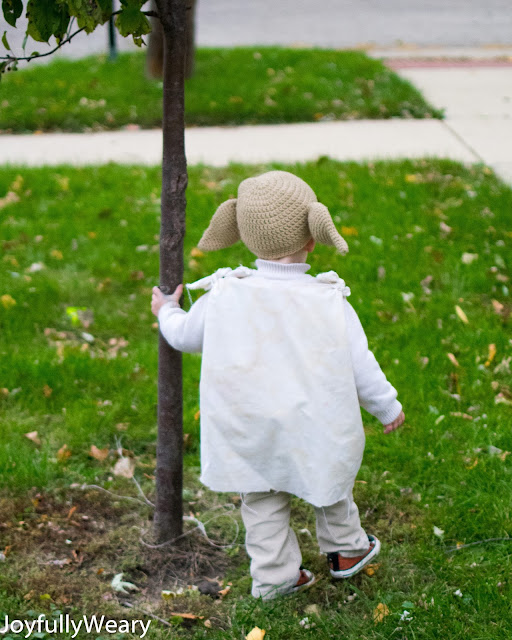 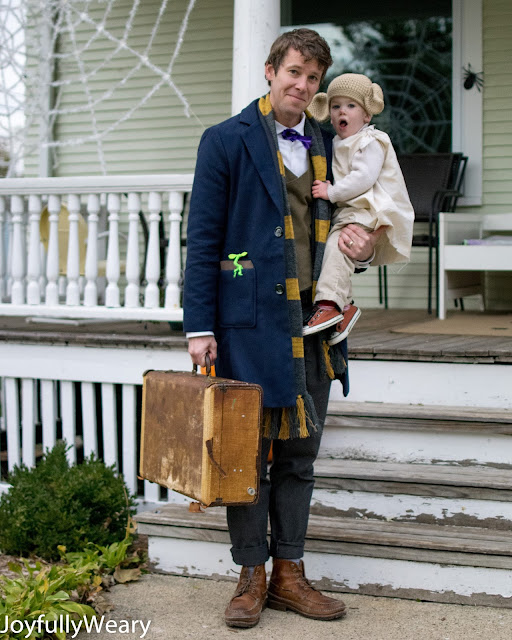 Most of our costumes we bought second-hand or we used items we already owned. We did splurge on wands and Jeremy's Newt Scamender coat and scarf. However, he's worn it every day since Halloween so I'd say the cost per wear is going to be pretty low.

Our house also got the  Harry Potter treatment. It's become a tradition to put Aragog and his children on our roof and porch. 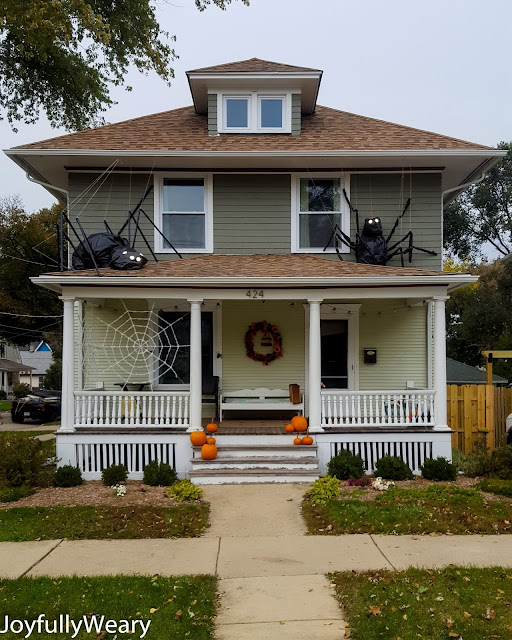 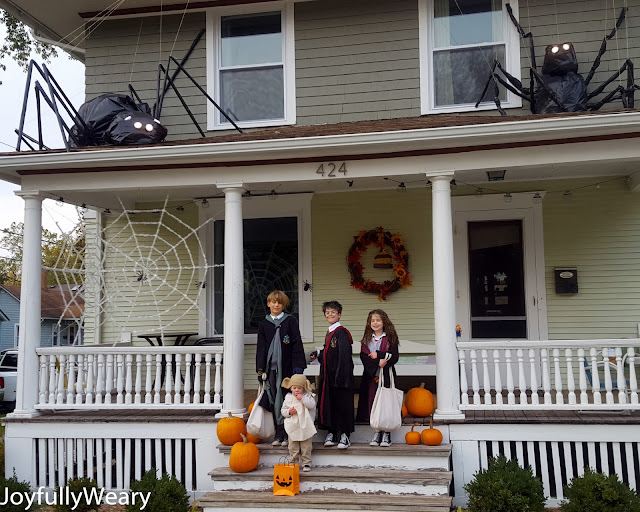 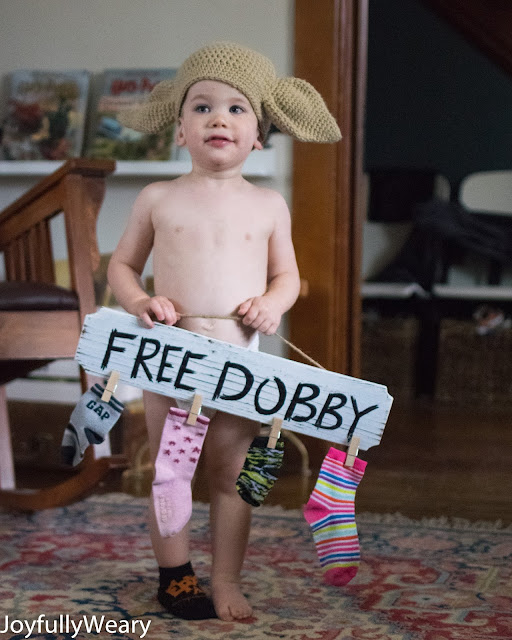 I also made a 'Free Dobby' sign to hang above our laundry shoot. 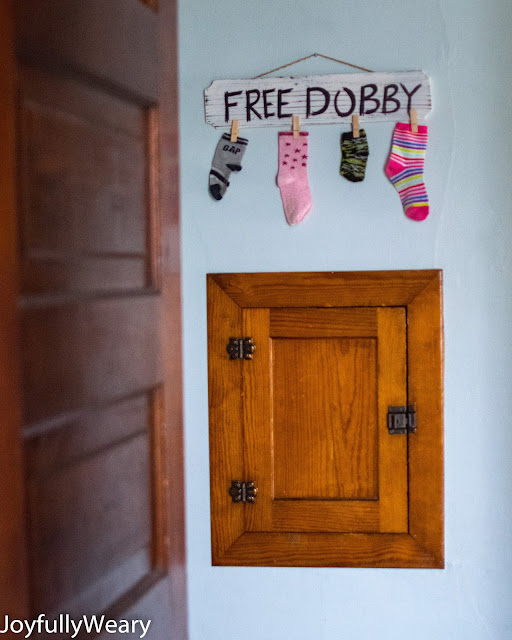 It makes us all smile whenever we see it, so it's will probably stay up at least through next Halloween. 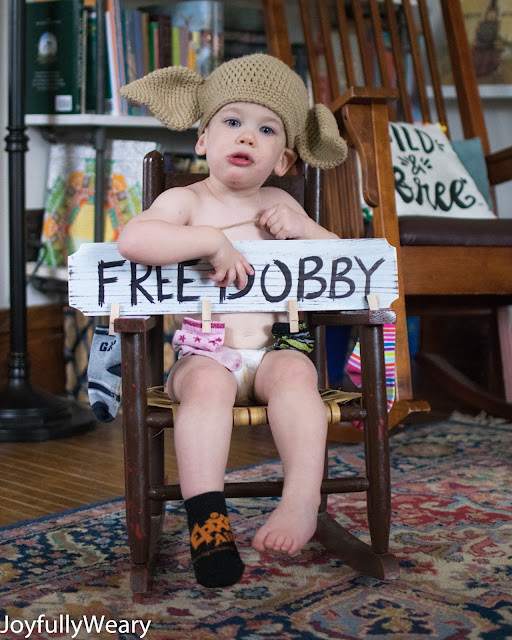