January 14, 2018
In years past, we've been working our way through Story of The World by Susan Wise Bauer. This year, however, we are taking a break from world history and studying American history. We joined a co-op and one of the classes the kids are taking is Hands On American History. Originally, I had planned on continuing Story of the World at home. We are about half-way through Vol 3, early modern history, so in some ways the lesson would coincide. I quickly realized, however, that it wasn't going to work. In class they do a lot of games and skits to make history come alive; but I also wanted to supplement what they were learning with some living books. There just isn't enough time to do the reading for both. For now, we've pressed pause on Story of the World and will probably pick it back up come May when the class ends.

We are just wrapping up our books on the America Revolution and the Founding Fathers; I thought I'd share what we read. 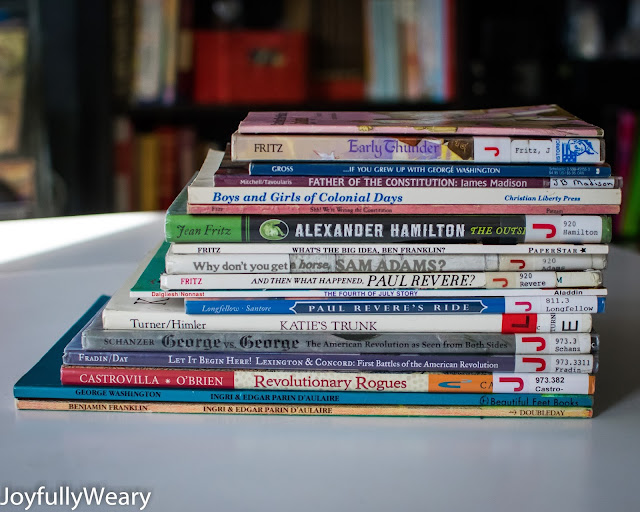 Jean Fritz is one of my go-to's for American history. She has written a plethora of historical and biographical children's books. Her books are quality - she is a Newbery Honor recipient, winner of the  Laura Ingalls Wilder Award, and was nominated for the Hans Christian Andersen Award. We ended up reading several of her books. One of the things that I like about Fritz's books is that while she in noway tears down the founding fathers (she writes eloquently about their brave, wise, and  radical acts) she doesn't glorify them either. She presents them as real humans with failings and a few funny quirks.
Another one of my go-to's for history is Ingri & Edgar Parin d'Aulaire. Every one of the books I've read by this husband and wife team has been a delight. They are a joy to read aloud and the illustrations are fabulous. They are also Newbery Honor recipients and winners of the Caldecott Medal.
Alice Dalgliesh, is also one of my favorite children authors, especially for younger historical fiction. She is a also a three time Newbery Honor recipient.
Several of the above books are hand-me-downs from Jeremy's mom; she used them when homeschooling Jer and his sisters.The next couple are also hand-me-downs - it's been such blessing to have resources that you know are quality and enjoyable.
The rest of the books we read were ones that we stumbled upon at the library or recommendations from Instagram. 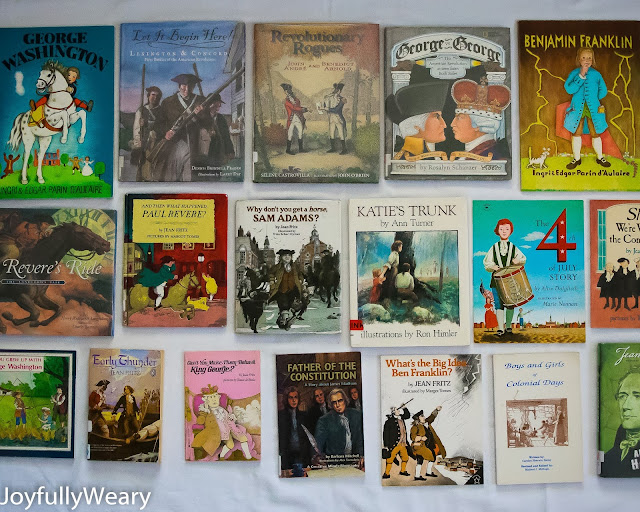 This is our first in-depth study of the founding of the United States of America, but for the last several years we've read books related to the topic every June and July. A couple years ago I shared some of our favorites, which you can find here. It differs a bit from this list; the selection is geared towards a younger crowd.

Next up in history we will be reading about westward migration. If you have any book suggestions, I'd love to hear them.

**Total Transparency - I am an Amazon associate. If you click and buy on some the links above I may earn a few cents...which will most likely be put towards buying more books.