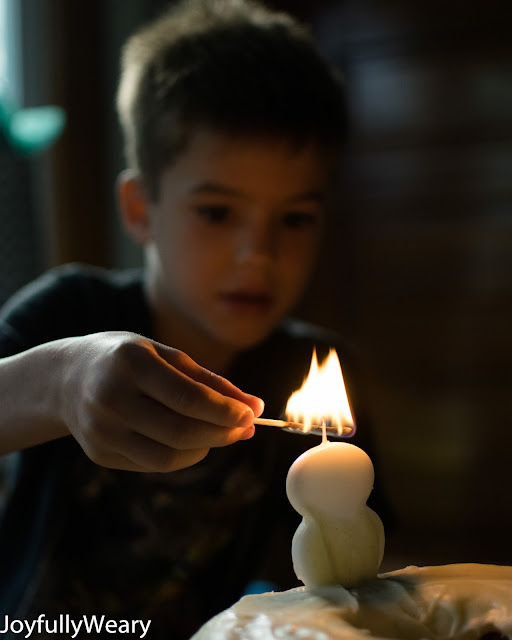 A couple weeks ago Mini Man turned eight. To say he is a joy is an understatement. Mini Man has always been an extrovert and seems to thrive off people. There is something more to him, though,  that is harder to put in to words...the best way I can think to describe it is that he is extremely empathetic. He's always been this way. He seems to have a sense for what others are feeling. He will frequently describe the motives or feelings behind someone's actions.  I think because of this he is quick to forgive.

Mini Man also seems to have the ability to put people at ease and make them feel welcome. We hardly ever go anywhere that he doesn't make a new a friend. Jeremy and I joke that he must be magnetic. He'll step outside to play and the next thing you know 1/2 dozen neighborhood kids have joined him in our yard.  Recently, he's been telling me that he is shy. I haven't been able to pinpoint why he's started to identify this way; he's just quick as ever to start a conversation with strangers despite their age or gender.

Mini Man is also extremely flexibility and generous. If he see that somebody wants something and he has extra (and sometimes he even he doesn't) it's makes him happy to be able share. It's rare that he eats a treat without sharing it. Anytime he's had a popsicle this summer he's always asked if he could take some out to his friends - his favorite kinds are the ones that you can split into two.

Mini Man's flexibility and love for making others happy makes him the favorite playmate of Little Lady and Big Buddy. He doesn't just go along with their plans but wholeheartedly joins in on their fun. He plays dolls, Legos, knights, house, explorer, etc with the same joyful enthusiasm. The biggest struggle in his life right now is how often his big brother and little sister fight over him.

One of the things I've learned to do as his mom is to pay extra attention to the things (outside of people) that bring him joy. To embolden him to take time to indulge in those things. To encourage him have people enter his 'world' instead of him always joining them in theirs. I delight in the fact that he is so quick to put others before himself, but I do not want him to forgo his interests.

I would say that Mini Man's 'things' could be summed up in two words "scaling and speed". He loves to build crazy cars tracks all over our house. His favorite things to do outside is to ride his bike, roller blade, or skateboard. He's a pretty fast runner, but usually only does that with me or while playing soccer or another game with his friends. His scaling sometimes gets him in trouble. I've lost count of the number of times he's been asked to get down from tree...and sometimes even the sides of buildings. If it's still production in 10 years I'm pretty sure Mini Man would be a great contestant for American Ninja Warrior. 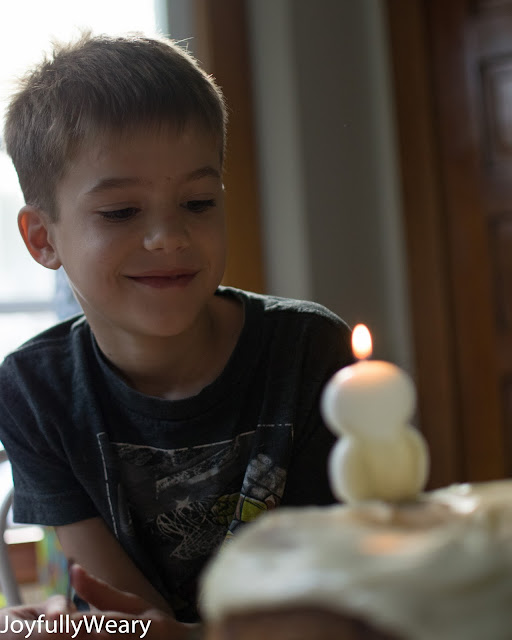 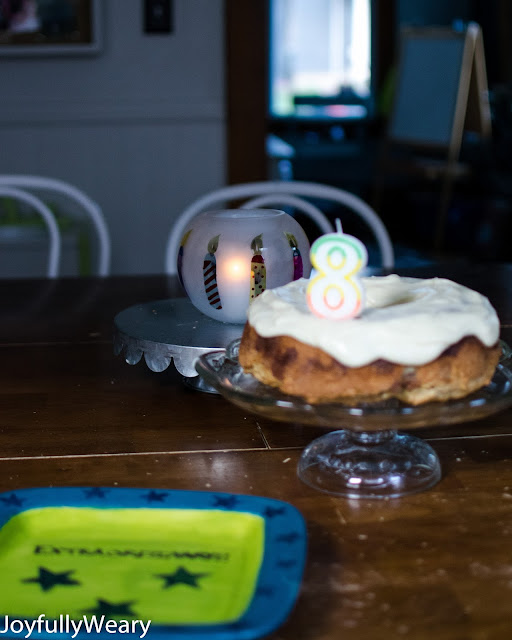 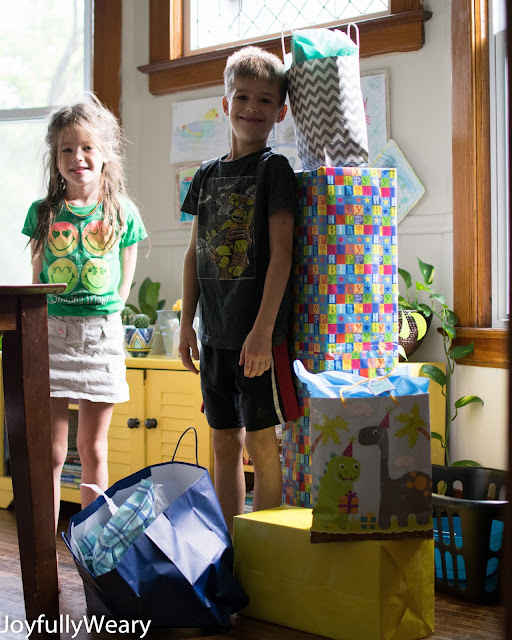 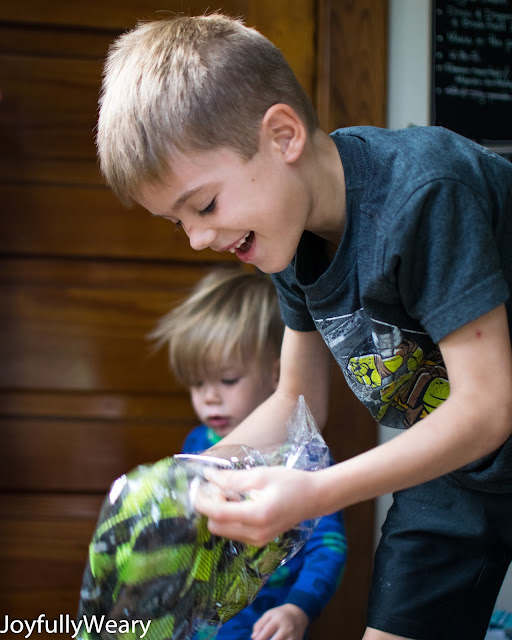 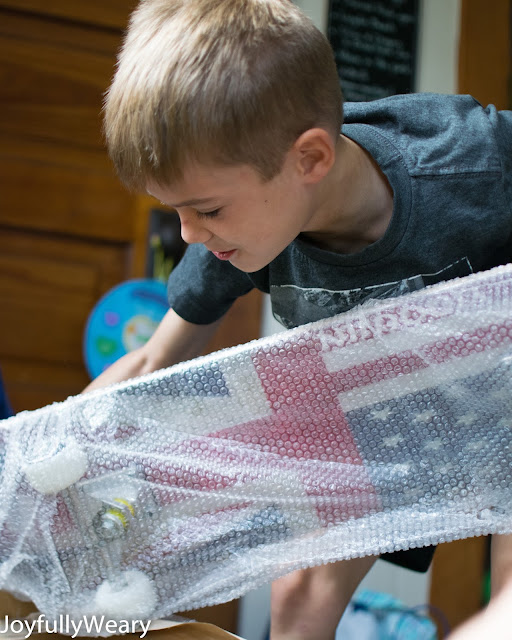 A perfect example of Mini Man's generosity - even though a full-size skateboard was #1 on his birthday wish-list he was delighted to give BabyZ a ride on it first. 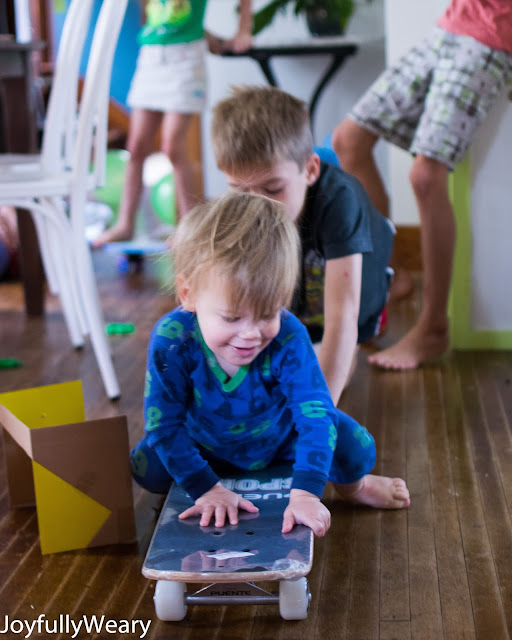 None of our kids are having friend birthday parties this year but we still wanted to have a celebration as a family. Since Mini Man likes climbing so much we knew that Funtopia would be the perfect way to celebrate him. 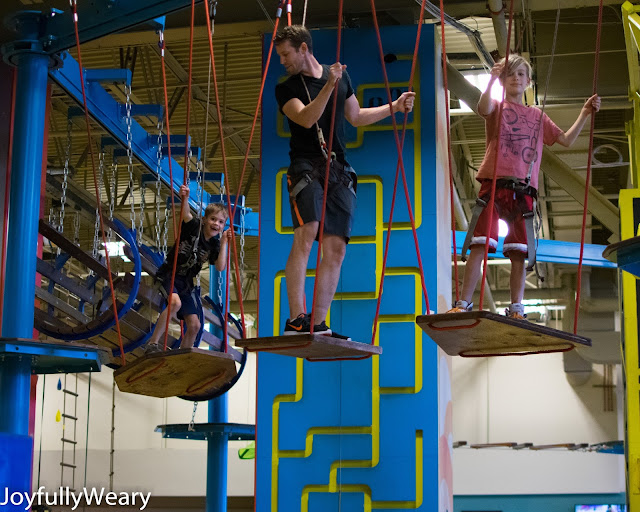 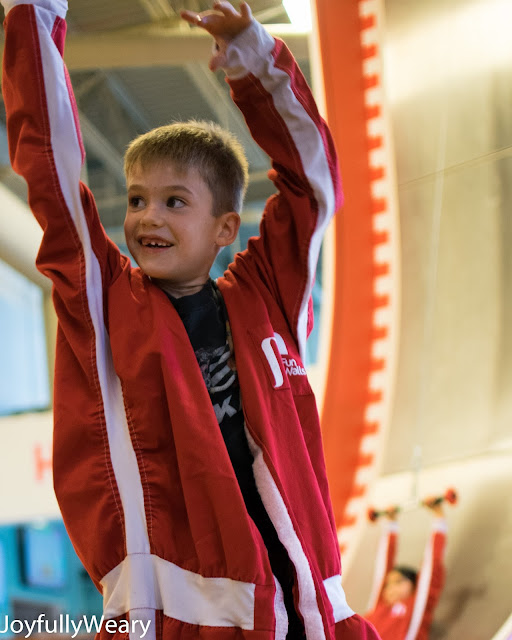 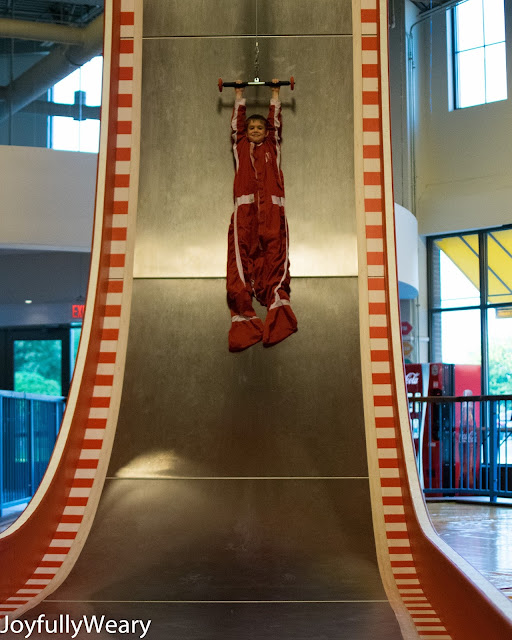 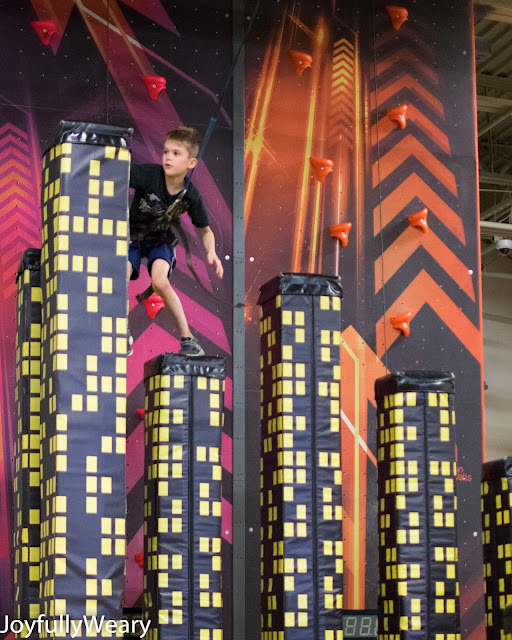 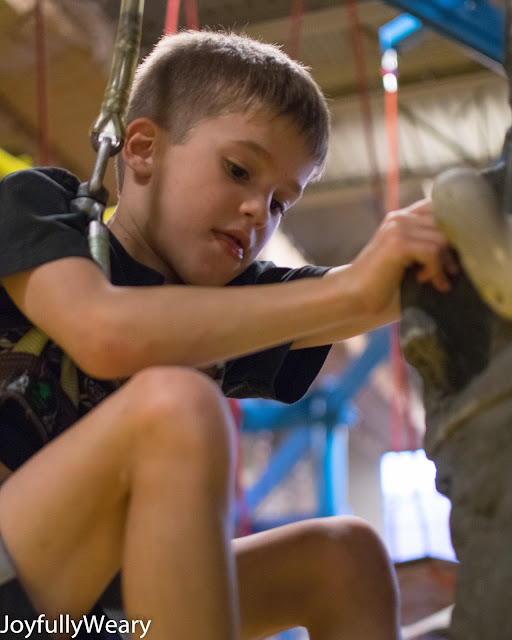 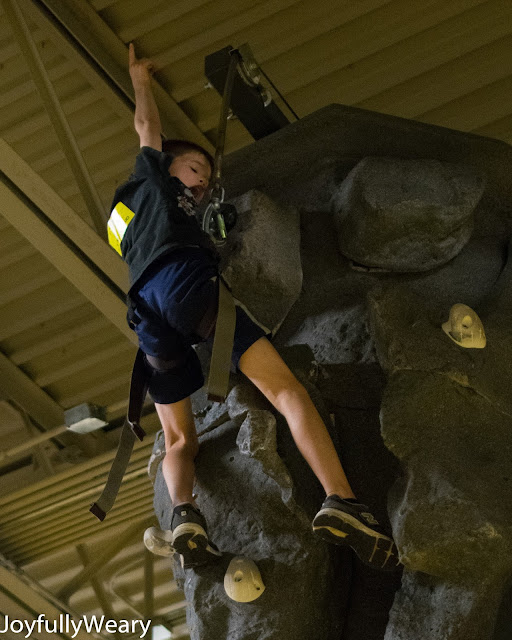 The rest of the kiddos were also pretty pumped about this activity...climbing may just have to become a family affair. 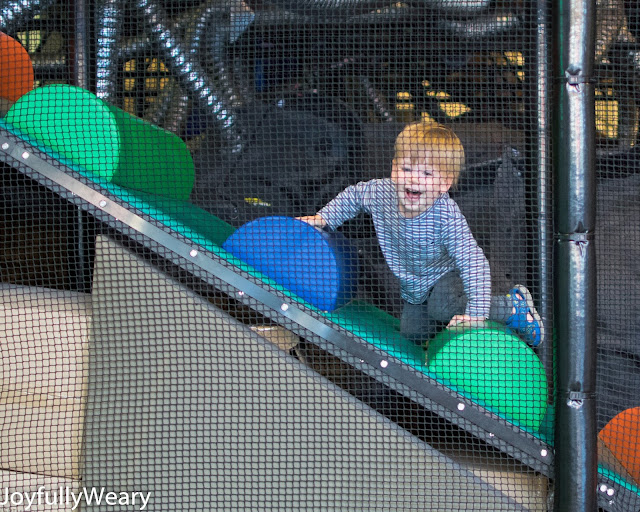 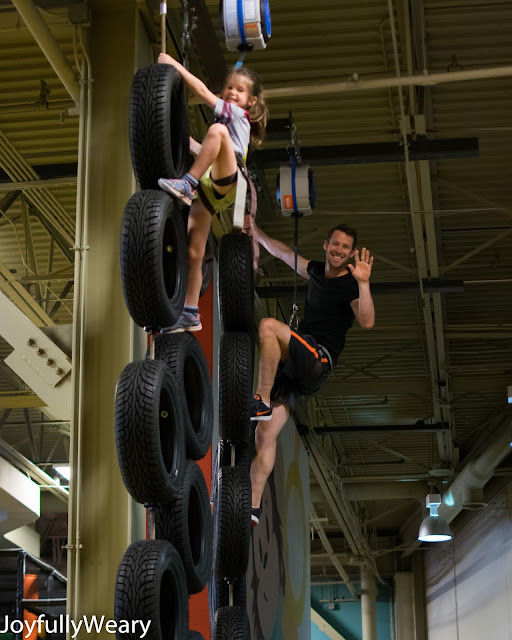 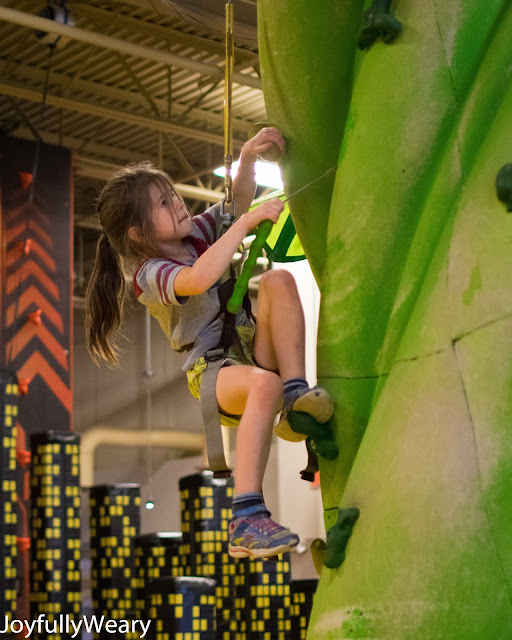 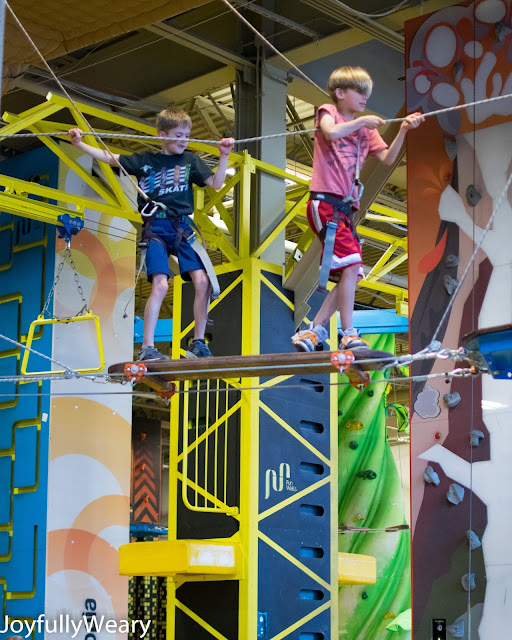 We had so much fun celebrating this smart sweet boy. I'm so excited to watch him grow and to see how the Lord continues to shape his unique personality. 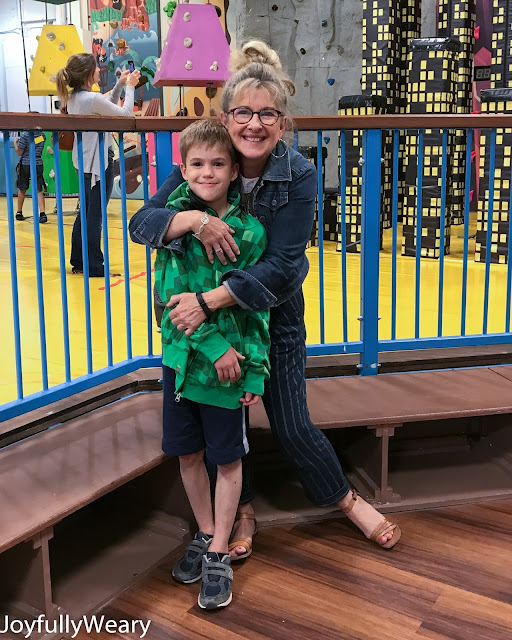 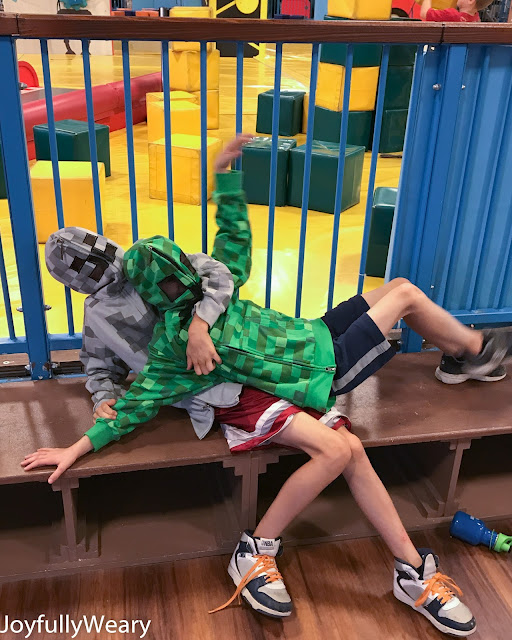